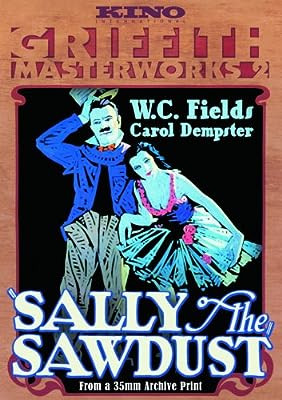 Price: $17.99
As of 2022-11-30 05:05:41 UTC (more info)
Product prices and availability are accurate as of 2022-11-30 05:05:41 UTC and are subject to change. Any price and availability information displayed on http://www.amazon.com/ at the time of purchase will apply to the purchase of this product.
Availability: Not Available - stock arriving soon
Buy Now from Amazon
Product Information (more info)
CERTAIN CONTENT THAT APPEARS ON THIS SITE COMES FROM AMAZON SERVICES LLC. THIS CONTENT IS PROVIDED 'AS IS' AND IS SUBJECT TO CHANGE OR REMOVAL AT ANY TIME.

FROM A 35mm ARCHIVE PRINT

In a fascinating departure from the austere moral drama in which he specialized, D.W. Griffith demonstrates his talent for warm-hearted comedy with SALLY OF THE SAWDUST. Fresh from the Ziegfeld Follies, W.C. Fields made his second screen appearance as Professor Eustace McGargle, a lovably disreputable confidence man who becomes the unlikely guardian of an orphaned circus waif (Carol Dempster). Intending to return Sally to her grandparents, McGargle learns that her wealthy and esteemed grandfather (Erville Alderson) is a stern judge who harbors a deep contempt for shysters and show people. Faster than a sucker can say three-card monte, McGargle finds himself wanted by the police and chased by bootleggers, while trying to protect his cherished Sally, who has won the affection of a slumming socialite (Alfred Lunt). SALLY provided Griffith ingenue Carol Dempster (whose work for the director is generally overshadowed by that of her predecessors, Mary Pickford and Lillian Gish) with a delightful role: the spry, innocent and hot-tempered dancing girl wholly devoted to her criminal Poppy. At the same time, it showcases the comic juggling and dry wit that would make a legend of W.C. Fields (who remade the film in 1936 under the title of the original play, Poppy. )