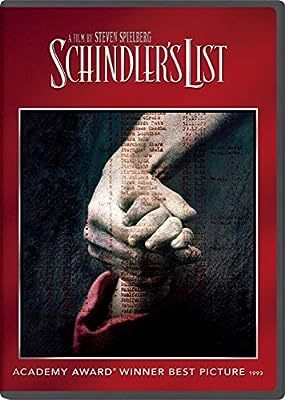 Price: $14.98
As of 2022-07-03 04:52:11 UTC (more info)
Product prices and availability are accurate as of 2022-07-03 04:52:11 UTC and are subject to change. Any price and availability information displayed on http://www.amazon.com/ at the time of purchase will apply to the purchase of this product.
Availability: Not Available - stock arriving soon
Buy Now from Amazon
Product Information (more info)
CERTAIN CONTENT THAT APPEARS ON THIS SITE COMES FROM AMAZON SERVICES LLC. THIS CONTENT IS PROVIDED 'AS IS' AND IS SUBJECT TO CHANGE OR REMOVAL AT ANY TIME.

Experience one of the most historically significant films of all time like never before with Steven Spielberg’s cinematic masterpiece, Schindler’s List. Winner of seven Academy Awards including Best Picture and Best Director, this incredible true story follows the enigmatic Oskar Schindler (Liam Neeson), who saved the lives of more than 1,100 Jews during the Holocaust. It is the triumph of one man who made a difference and the drama of those who survived one of the darkest chapters in human history because of what he did. Meticulously restored from the original film negative and supervised by Steven Spielberg, Schindler’s List is a powerful story whose lessons of courage and faith continue to inspire generations.

Something Wild (The Criterion Collection...