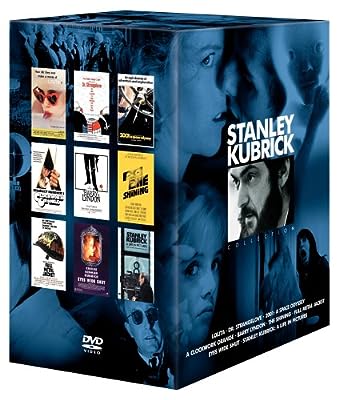 Price: $129.98
As of 2022-08-15 18:01:17 UTC (more info)
Product prices and availability are accurate as of 2022-08-15 18:01:17 UTC and are subject to change. Any price and availability information displayed on http://www.amazon.com/ at the time of purchase will apply to the purchase of this product.
Availability: Not Available - stock arriving soon
Buy Now from Amazon
Product Information (more info)
CERTAIN CONTENT THAT APPEARS ON THIS SITE COMES FROM AMAZON SERVICES LLC. THIS CONTENT IS PROVIDED 'AS IS' AND IS SUBJECT TO CHANGE OR REMOVAL AT ANY TIME.

With the 1957 release of Paths of Glory, Stanley Kubrick confirmed his early promise and joined the ranks of world-class filmmakers. The age of the auteur had arrived, and Kubrick was a prime candidate for inclusion in the pantheon of directors later canonized by critic Andrew Sarris in his influential book The American Cinema. Ironically, this was also the period during which Kubrick left his native soil for permanent residence in England, and from that point forward, the Kubrick mystique inflated to legendary proportions. But if Kubrick was no longer bringing himself to the world, he was certainly bringing the world to his films. From the comfort of his rural England estate and locations never far from London, Kubrick would command cinematic odysseys to isolated Colorado (in The Shining), battle-ravaged Vietnam (Full Metal Jacket), upscale New York City (Eyes Wide Shut), and, of course, Jupiter and Beyond the Infinite (in 2001: A Space Odyssey).

The New Stanley Kubrick Collection includes all eight of Kubrick's films from Lolita on--a quarter-century of brilliant, challenging cinema. This second edition adds Eyes Wide Shut to the previous collection and remastered sound on five of the films plus a new anamorphic edition of 2001. Purists have complained that Kubrick's last three films have been released in full-screen format only; this was in compliance with Kubrick's wishes, and the films do not suffer unduly from full-screen formatting. This set also features a new full-length documentary made by longtime Kubrick assistant Jan Harlan, Stanley Kubrick: A Life in Pictures. The diversity of Kubrick's work is truly astonishing, even though the director's technical precision and steely perspective on humanity may strike uninitiated viewers as cold and even misanthropic. His films almost always received mixed (and sometimes scathingly negative) reviews upon their release, only to benefit from glowing reassessment as they grew entrenched in the public consciousness. Here, in all their glory, are the collected films of a genuine master, ripe for study and appreciation for many years to come. --Jeff Shannon