Stage and Spectacle: Three Films by Jean Renoir (The Golden Coach / French Cancan / Elena and Her Men) (The Criterion Collection) 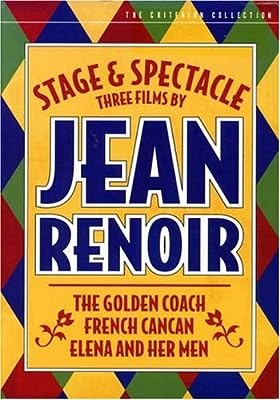 Price: $48.08
As of 2022-08-15 10:00:40 UTC (more info)
Product prices and availability are accurate as of 2022-08-15 10:00:40 UTC and are subject to change. Any price and availability information displayed on http://www.amazon.com/ at the time of purchase will apply to the purchase of this product.
Availability: Not Available - stock arriving soon
Buy Now from Amazon
Product Information (more info)
CERTAIN CONTENT THAT APPEARS ON THIS SITE COMES FROM AMAZON SERVICES LLC. THIS CONTENT IS PROVIDED 'AS IS' AND IS SUBJECT TO CHANGE OR REMOVAL AT ANY TIME.

Near the end of his long and celebrated career, master filmmaker Jean Renoir indulged his lifelong obsession with life-as-theater and directed The Golden Coach (1953), French Cancan (1955), and Elena and Her Men (1956), three delirious films, infatuated with the past, love, and artifice. Awash in jubilant Technicolor, each film interweaves public display and private feelings through the talents of three immortal film icons#Anna Magnani, Jean Gabin, and Ingrid Bergman. The Criterion Collection is proud to present these three majestic films by Jean Renoir for the first time on DVD.

These three Jean Renoir films were not conceived as a trilogy, but they fit beautifully together in this Criterion package: all luscious with theatrical color, wry in tone, and awestruck by beautiful women. When Renoir returned to Europe after his wartime exile in Hollywood, he first turned to The Golden Coach (1953), an international co-production shot in Rome. It contains all of Renoir's love of the theatrical life, as a traveling troupe of actors arrives in a colonial town in South America, and the leading lady (lightning-quick Anna Magnani) bewitches her many suitors--yet knows she is most brilliantly alive when she is on stage. The film was shot in multiple languages; this is the English, which Renoir preferred.

French Cancan is perhaps the greatest backstage movie ever made. Jean Gabin plays a stage impresario of the 1880s (surely a stand-in for Renoir himself), hatching a plan to revive the naughty can-can and school a young ingenue (Francoise Arnoul) in the rigors of art and life. With 1956's Elena and Her Men, Renoir relies on the effortless beauty of Ingrid Bergman, as a Polish princess juggling devotees (including Jean Marais as a smitten general, for whom love trumps politics every time). While not a woman of the theater, Elena understands the value of putting on a show.

The Criterion box is an authoritative pleasure (including the pretty packaging), featuring best-possible visual transfers. Excellent archival introductions to Elena and Golden Coach are delivered by Renoir himself, shot sometime in the 1960s; Peter Bogdanovich provides a solid 10-minute talk on Cancan. A one-hour-plus, three-part Renoir interview, conducted by New Wave filmmaker-critic Jacques Rivette, is spread across all three discs; Renoir is in fascinating, aphoristic form ("Intelligence is terrible. It makes us do stupid things"). Part of an informative BBC documentary, Jean Renoir: Hollywood and Beyond, is bundled with Elena. Essays by the likes of Andrew Sarris and Jonathan Rosenbaum provide context for Renoir's celebratory but unsparing look at the intersection of Art and Life. --Robert Horton