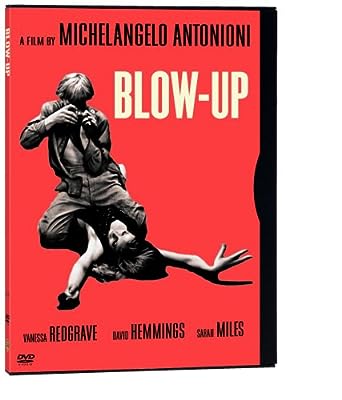 Price: $15.99
As of 2022-11-28 07:38:25 UTC (more info)
Product prices and availability are accurate as of 2022-11-28 07:38:25 UTC and are subject to change. Any price and availability information displayed on http://www.amazon.com/ at the time of purchase will apply to the purchase of this product.
Availability: Not Available - stock arriving soon
Buy Now from Amazon
Product Information (more info)
CERTAIN CONTENT THAT APPEARS ON THIS SITE COMES FROM AMAZON SERVICES LLC. THIS CONTENT IS PROVIDED 'AS IS' AND IS SUBJECT TO CHANGE OR REMOVAL AT ANY TIME.

With Blow-up, Italian director Michelangelo Antonioni created one of the most fascinating and psychedelic art films, which tells the story of a desensitized and nihilistic London photographer who may have or not have witnessed a murder. Antonioni uses the formulaic materials for a traditional suspense thriller, without the climatic payoff. Blow-up is less about the pieces to a puzzle and is more a character study on a soulless empty vessel who becomes spiritually awakened and aroused by his passion as a photographer when he begins to discover that he may be involved in something much more significant than himself.

Taking photographs of a couple making love proves deadly when the photographer enlarges the image and discovers murder. The film and pictures are stolen from his studio and the body vanishes. In this elegant balance of deciet and trickery, the photographer must question the reality of what he has actually seen.

This 1966 masterpiece by Michelangelo Antonioni (The Passenger) is set in the heady atmosphere of Swinging London, and stars David Hemmings as an unsmiling fashion photographer hooked on ephemeral meaning attached to anything: art, sex, work, relationships, drugs, events. When a real mystery falls into his lap, he probes the evidence for some reliable truth, but finds it hard to reckon with. Vanessa Redgrave plays an enigmatic woman whose desperation to cover something up only seems like one more phenomenon in Hemmings's disinterested purview. This is one of the key films of the decade, and still an unsettling and lasting experience. --Tom Keogh

The themes that Antonioni is trying to express in Blow-up are masterfully presented in the infamous and philosophical final sequence of the film, in which the photographer encounters a group of pantomiming mimes that play an invisible game of tennis with an imaginary ball. We can hear the sounds of tennis on the soundtrack and yet this unseen tennis ball is as real or imagined as the photographs within the story. They both seem to coexist in a world that is an illusion emphasizing the thin line between objective art and abstract reality; as Antonioni also suggests the illusion of the cinema and the authenticity of its images that an audience perceives and interprets when the director places them up on the screen.

Identification of a Woman (The Criterion...