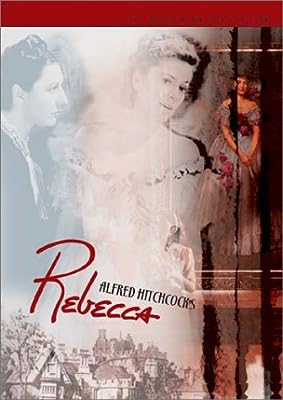 Price: $73.38
As of 2023-02-05 05:31:40 UTC (more info)
Product prices and availability are accurate as of 2023-02-05 05:31:40 UTC and are subject to change. Any price and availability information displayed on http://www.amazon.com/ at the time of purchase will apply to the purchase of this product.
Availability: Not Available - stock arriving soon
Buy Now from Amazon
Product Information (more info)
CERTAIN CONTENT THAT APPEARS ON THIS SITE COMES FROM AMAZON SERVICES LLC. THIS CONTENT IS PROVIDED 'AS IS' AND IS SUBJECT TO CHANGE OR REMOVAL AT ANY TIME.

"Last night, I dreamt I went to Manderley again." Rebecca’s haunting opening line conjures the entirety of Hitchcock’s romantic, suspenseful, elegant film. A young woman (Joan Fontaine) believes her every dream has come true when her whirlwind romance with the dashing Maxim de Winter (Sir Laurence Olivier) culminates in marriage. But she soon realizes that Rebecca, the dead first Mrs. De Winter, haunts both the temperamental, brooding Maxim and the de Winter mansion, Manderley. In order for Maxim and the new Mrs. De Winter to have a future, Rebecca’s spell must be broken and the mystery of her violent death unraveled. The first collaboration between producer David O. Selznick and Hitchcock, Rebecca was adapted from Daphne du Maurier’s popular novel and won the 1940 Academy Awards for Best Picture and Best Cinematography (Black and White).