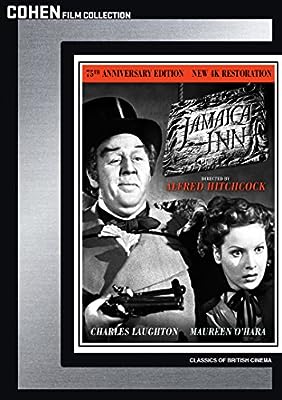 Price:
As of 2022-12-09 06:15:28 UTC (more info)
Product prices and availability are accurate as of 2022-12-09 06:15:28 UTC and are subject to change. Any price and availability information displayed on http://www.amazon.com/ at the time of purchase will apply to the purchase of this product.
Availability: Not Available - stock arriving soon
Buy Now from Amazon
Product Information (more info)
CERTAIN CONTENT THAT APPEARS ON THIS SITE COMES FROM AMAZON SERVICES LLC. THIS CONTENT IS PROVIDED 'AS IS' AND IS SUBJECT TO CHANGE OR REMOVAL AT ANY TIME.

A rediscovered classic by the master of suspense, fully restored in 4K in collaboration with the British Film Institute from an archival picture negative. In this dark period drama, a young woman discovers her uncle heads a gang of ship-wreckers and murderers under the secret patronage of the local squire, wickedly played by Charles Laughton. Her efforts to stop their wicked ways leads her down a path filled with murder and betrayal. DVD FEATURES: Feature length audio commentary by critic Jeremy Arnold; New video essay by author Donald Spoto; 2014 re-release trailer

Jayne Mansfield Collection (The Girl Can...