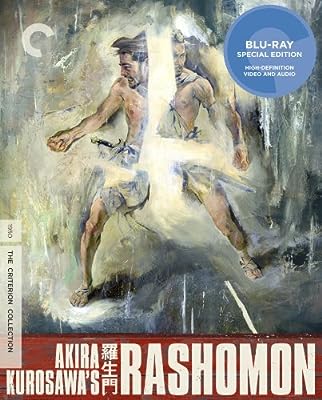 Price: $38.34
As of 2023-02-01 06:27:10 UTC (more info)
Product prices and availability are accurate as of 2023-02-01 06:27:10 UTC and are subject to change. Any price and availability information displayed on http://www.amazon.com/ at the time of purchase will apply to the purchase of this product.
Availability: Not Available - stock arriving soon
Buy Now from Amazon
Product Information (more info)
CERTAIN CONTENT THAT APPEARS ON THIS SITE COMES FROM AMAZON SERVICES LLC. THIS CONTENT IS PROVIDED 'AS IS' AND IS SUBJECT TO CHANGE OR REMOVAL AT ANY TIME.

Akira Kurosawa's Rashomon was the first Japanese film that became a huge international hit all around the world especially here in the west. The film won numerous awards including the Golden Lion at the Venice Film Festival and the Academy Award for Best Foreign Language Film. Rashomon and it's non-linear storyline was revolutionary in the way films were conceived, as its screenplay contained four separate testimonies that did not match each other and in the end there was no 'final' correct version of what really happened. It was also the first film to use flashbacks that might or might not be the truth on what really happened within those flashbacks. When an audience is usually provided with a flashback, we automatically assume this flashback that is given to use reflects the truth. But all it reflects is a point of view, a point of view which could easily be inaccurate, misinterpreted, skewed, and lied about.

A riveting psychological thriller that investigates the nature of truth and the meaning of justice, Rashomon is widely considered one of the greatest films ever made. Four people recount different versions of the story of a man’s murder and the rape of his wife, which director Akira Kurosawa (Seven Samurai) presents with striking imagery and an ingenious use of flashbacks. This eloquent masterwork and international sensation revolutionized film language and introduced Japanese cinema—and a commanding new star by the name of Toshiro Mifune (Yojimbo)—to the Western world.

Rashomon was one of the first films to supply first-person eyewitness accounts that were radically different from one another; with one eyewitness even channeled through the grave by a psychic medium. But what made Rashomon even more revolutionary and shocking was that no version was the truth, and every version was. Kurosawa states in his autobiography, "Human beings are unable to be honest with themselves about themselves. They cannot talk about themselves without embellishing." Rashomon and its unorthodox style influenced several other films throughout the years including The Usual Suspects, Run Lola Run and Hero directed by Yimou Zhang. In all films before this audiences were used to flashbacks or dream sequences that reflected the truth. This film reflects that the truth is correct through the point of view of the person telling it; but isn't necessarily the truth itself.