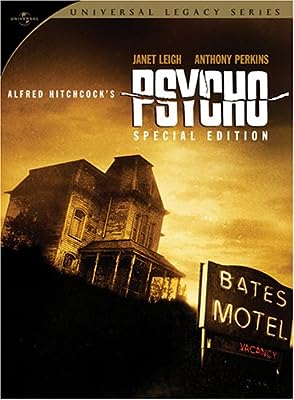 Price: $11.99
As of 2022-11-27 22:53:16 UTC (more info)
Product prices and availability are accurate as of 2022-11-27 22:53:16 UTC and are subject to change. Any price and availability information displayed on http://www.amazon.com/ at the time of purchase will apply to the purchase of this product.
Availability: Not Available - stock arriving soon
Buy Now from Amazon
Product Information (more info)
CERTAIN CONTENT THAT APPEARS ON THIS SITE COMES FROM AMAZON SERVICES LLC. THIS CONTENT IS PROVIDED 'AS IS' AND IS SUBJECT TO CHANGE OR REMOVAL AT ANY TIME.

One of the most shocking films of all time, Alfred Hitchcock’s Psycho, is now available as a new 2-Disc Special Edition! Join the Master of Suspense on a chilling journey as an unsuspecting victim (Janet Leigh) visits the Bates Motel and falls prey to one of cinema’s most notorious psychopaths – Norman Bates (Anthony Perkins).Named #1 on the AFI’s 100 Years…100 Thrills list, this notorious film has become a cultural phenomenon. Featuring one of the most iconic scenes in film history - the famous “shower scene” – plus new bonus features and digitally remastered picture, Psycho is “still terrifying after all these years” (Leonard Maltin’s Classic Movie Guide).

At last--a great American movie available on video for the first time in its original aspect ratio. For all the slasher pictures that have ripped off Psycho (and particularly its classic set piece, the "shower scene"), nothing has ever matched the impact of the real thing. More than just a first-rate shocker full of thrills and suspense, Psycho is also an engrossing character study in which director Alfred Hitchcock skillfully seduces you into identifying with the main characters--then pulls the rug (or the bathmat) out from under you. Anthony Perkins is unforgettable as Norman Bates, the mama's boy proprietor of the Bates Motel; and so is Janet Leigh as Marion Crane, who makes an impulsive decision and becomes a fugitive from the law, hiding out at Norman's roadside inn for one fateful night. Psycho gets the masterpiece treatment it deserves on DVD, with extras including newsreel footage surrounding the making and release of the movie; an archive of production stills; the special trailer in which Hitchcock (acting as one of the original Universal Studio tour guides) himself leads viewers around the Bates place; credit designer Saul Bass's original "shower scene" story boards; posters and advertising materials for the movie's William Castle-like publicity campaign (No One Will Be Seated After the Feature Begins!); and a 90-minute documentary on the making of the film! What more could any movie fan possibly want? --Jim Emerson