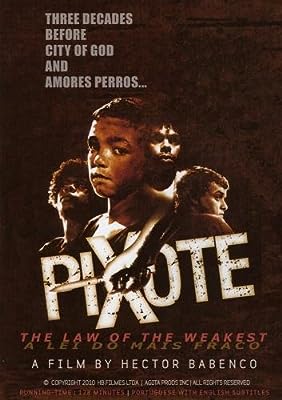 Hector Babenco, who went on to direct the acclaimed KISS OF THE SPIDER WOMAN, made an international splash with this gritty portrait of juvenile poverty and street crime in Brazil. Pixote (Portuguese slang for "Peewee") is the name of a chubby-cheeked 10-year-old runaway played by real-life slum kid Fernando Ramos da Silva. He's a natural, creating a childlike and vulnerable character left emotionally hardened and morally adrift by his brutal experiences. In an overcrowded São Paulo "reform school," a cross between a prison and an army barracks, he learns the hard facts of survival as he watches gangs prey on weaker kids, and the cops and guards abuse, beat, and even murder their charges. Pixote escapes and turns to street crime in Rio with a small gang, but his dreams of big money and a good life are dashed as they play at crime in a violent kill-or-be-killed world. Equal parts exposé and social drama, PIXOTE dramatizes the plight of millions of children who live on the streets or get ground up in the system that breeds hardened criminals from juvenile delinquents. Like Luis Buñuel's LOS OLVIDADOS, one of Babenco's inspirations, this occasionally melodramatic portrait of poverty is shocking and affecting, but no more so than da Silva's own life story. After completing the film he sank back into poverty and crime, and died on the streets. His life became the subject of the 1996 film WHO KILLED PIXOTE?, which showed that despite the outcry created by PIXOTE Brazil has done little to alleviate these conditions. --Sean Axmaker (film is in Portuguese with English subtitles)