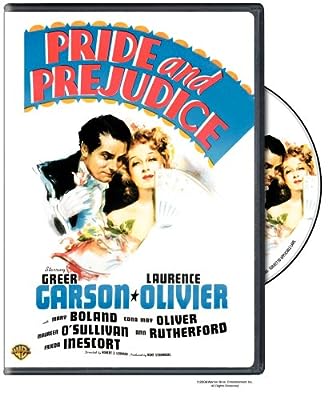 Price: $19.97
As of 2022-12-06 19:22:47 UTC (more info)
Product prices and availability are accurate as of 2022-12-06 19:22:47 UTC and are subject to change. Any price and availability information displayed on http://www.amazon.com/ at the time of purchase will apply to the purchase of this product.
Availability: Not Available - stock arriving soon
Buy Now from Amazon
Product Information (more info)
CERTAIN CONTENT THAT APPEARS ON THIS SITE COMES FROM AMAZON SERVICES LLC. THIS CONTENT IS PROVIDED 'AS IS' AND IS SUBJECT TO CHANGE OR REMOVAL AT ANY TIME.

Academy Award winners Sir Laurence Olivier and Greer Garson star in thefilm adaptation of Jane Austin's classic novel Pride and Prejudice. Thesocially conscious Mrs. Bennet (Mary Boland), with the begrudging helpof her husband (Edmund Gwenn), sets out to find suitable--and suitablyrich--husbands for her five daughters. The already difficult projectbecomes even more complicated when Mrs. Bennet's strongest-willeddaughter, Elizabeth (Garson), decides to pursue rich and handsome, butcynical and boorish, Mr. Darcy (Olivier). But Elizabeth will only winMr. Darcy on her own terms--and only after exacting genteel revenge forhis initial indifference toward her in this story of romance, wit andmanners.

Jane Austen's wonderful novel has been adapted to the screen many times, with this 1940 version representing the golden age of the Hollywood studio era. Greer Garson, then just on the cusp of her stardom, plays the headstrong Elizabeth Bennet, smartest of five daughters who must be married off. Laurence Olivier is that difficult fellow Mr. Darcy, whose mulishness about the Bennet girls begins to thaw when he gets a dose of Elizabeth's sense and sensibility. The film is done up in the glamorous MGM house style, which means we're stuck with the less-than-inspired direction of Robert Z. Leonard (The Great Ziegfeld), redeemed somewhat by a collection of handsome sets (Cedric Gibbons and Paul Groesse won the Oscar for Interior Decoration) and the dandy photography by Karl Freund, one of the greats. Anyone accustomed to the 1995 miniseries version of Pride and Prejudice will need to adjust to the swifter demands of a two-hour movie, and to be sure this version, like the 2005 Keira Knightley remake, simplifies some of Austen's scenes. It's one of the few films, by the way, with Aldous Huxley as a credited screenwriter. Edmund Gwenn is lovely as Mr. Bennet, and Mary Boland brash as Mrs. Bennet; Garson, although MGM liked to corset her in fine-lady roles, manages to let Elizabeth's sauciness come through. Actually, the movie's weak spot is Laurence Olivier's elaborate performance as Darcy, which feels too theatrical. Not that it matters; Austen's story is so good, the film sails through to its delicious finish with all flags flying. --Robert Horton

Pride of the Yankees, The

Planet of the Apes [Blu-ray]