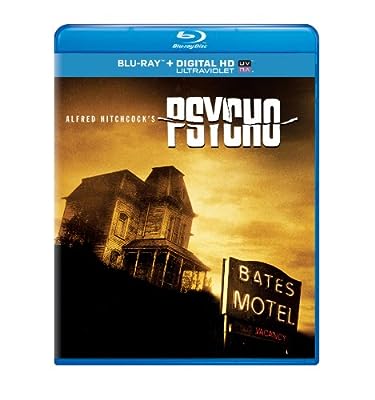 Price: $19.98
As of 2023-02-01 10:51:12 UTC (more info)
Product prices and availability are accurate as of 2023-02-01 10:51:12 UTC and are subject to change. Any price and availability information displayed on http://www.amazon.com/ at the time of purchase will apply to the purchase of this product.
Availability: Not Available - stock arriving soon
Buy Now from Amazon
Product Information (more info)
CERTAIN CONTENT THAT APPEARS ON THIS SITE COMES FROM AMAZON SERVICES LLC. THIS CONTENT IS PROVIDED 'AS IS' AND IS SUBJECT TO CHANGE OR REMOVAL AT ANY TIME.

One of the most shocking films of all time, Alfred Hitchcock’s Psycho changed the thriller genre forever. Join the Master of Suspense on a chilling journey as an unsuspecting victim (Janet Leigh) visits the Bates Motel and falls prey to one of cinema’s most notorious psychopaths - Norman Bates (Anthony Perkins). Named #1 on the AFI’s 100 Years…100 Thrills list, this notorious film has become a cultural phenomenon. Featuring one of the most iconic scenes in film history - the famous “shower scene”, Psycho is “still terrifying after all these years” (Leonard Maltin’s Classic Movie Guide).