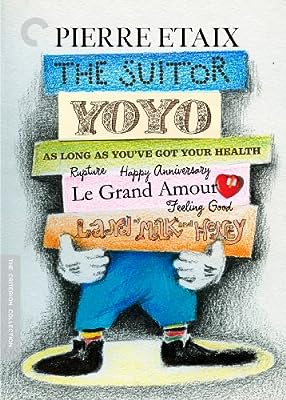 Price: $49.95
As of 2022-11-30 10:09:15 UTC (more info)
Product prices and availability are accurate as of 2022-11-30 10:09:15 UTC and are subject to change. Any price and availability information displayed on http://www.amazon.com/ at the time of purchase will apply to the purchase of this product.
Availability: Not Available - stock arriving soon
Buy Now from Amazon
Product Information (more info)
CERTAIN CONTENT THAT APPEARS ON THIS SITE COMES FROM AMAZON SERVICES LLC. THIS CONTENT IS PROVIDED 'AS IS' AND IS SUBJECT TO CHANGE OR REMOVAL AT ANY TIME.

A French comedy master whose films went unseen for decades as a result of legal tangles, director-actor Pierre Etaix is a treasure the cinematic world has rediscovered and taken up with relish. His work can be placed in the spectrum of classic physical comedy with that of Jacques Tati and Jerry Lewis, but it also stands alone. These films, influenced by Etaix's experiences as a circus acrobat and clown and by the silent film comedies he adored, are elegantly deadpan, but as an on-screen presence, Etaix radiates warmth. This collection includes all of his films, including five features, The Suitor (1962), Yoyo (1965), As Long as You've Got Your Health (1966), Le grand amour (1969), and Land of Milk and Honey (1971)—most of them collaborations with the great screenwriter Jean-Claude Carrière (The Discreet Charm of the Bourgeoisie)—and three shorts, Rupture (1961), the Oscar-winning Happy Anniversary (1962), and Feeling Good (1966). Not one of these is anything less than a bracing and witty delight.