Port of Shadows (The Criterion Collection) 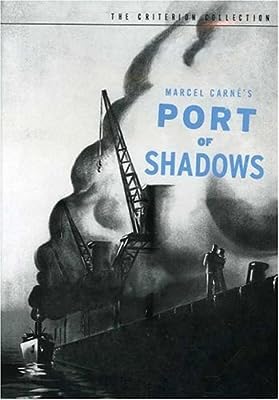 Price: $29.95
As of 2021-10-23 09:46:21 UTC (more info)
Product prices and availability are accurate as of 2021-10-23 09:46:21 UTC and are subject to change. Any price and availability information displayed on http://www.amazon.com/ at the time of purchase will apply to the purchase of this product.
Availability: Not Available - stock arriving soon
Buy Now from Amazon
Product Information (more info)
CERTAIN CONTENT THAT APPEARS ON THIS SITE COMES FROM AMAZON SERVICES LLC. THIS CONTENT IS PROVIDED 'AS IS' AND IS SUBJECT TO CHANGE OR REMOVAL AT ANY TIME.

Down a foggy, desolate road to the port city of Le Havre travels Jean (Jean Gabin), an army deserter looking for another chance to make good on life. Fate, however, has a different plan for him, when acts of both revenge and kindness turn him into front-page news. Also starring the blue-eyed phenomenon Michèle Morgan in her first major role, and the menacing Michel Simon, Port of Shadows (Le Quai des brumes) starkly portrays an underworld of lonely souls wrestling with their own destinies. Based on the novel by Pierre Mac Orlan, the inimitable team of director Marcel Carné and writer Jacques Prévert deliver a quintessential example of poetic realism, one of the classics of the golden age of French cinema.