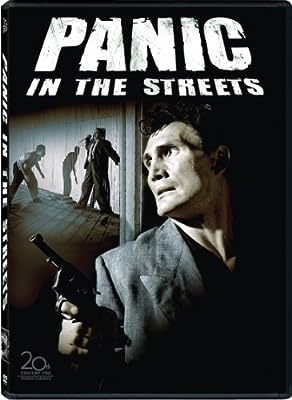 Price: $6.89
As of 2022-12-09 19:12:51 UTC (more info)
Product prices and availability are accurate as of 2022-12-09 19:12:51 UTC and are subject to change. Any price and availability information displayed on http://www.amazon.com/ at the time of purchase will apply to the purchase of this product.
Availability: Not Available - stock arriving soon
Buy Now from Amazon
Product Information (more info)
CERTAIN CONTENT THAT APPEARS ON THIS SITE COMES FROM AMAZON SERVICES LLC. THIS CONTENT IS PROVIDED 'AS IS' AND IS SUBJECT TO CHANGE OR REMOVAL AT ANY TIME.

In this suspenseful melodrama, a bullet-ridden corpse turns up in the water off the New Orleans docks. To the police, he's a John Doe...until a public health doctor (Richard Widmark) discovers he carries a virulent strain of bubonic plague. Hundreds of officers are mobilized to track down the killers and all who had contact with the dead man in a desperate race against the clock before the highly contagious disease spreads far beyond the port area and puts the entire country in peril.