Paul Robeson: Portraits of the Artist (The Criterion Collection) 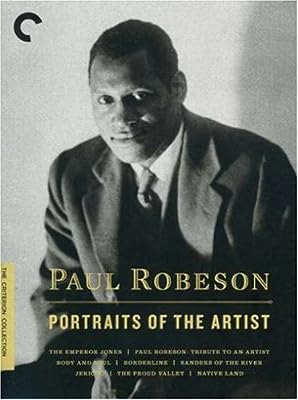 Price: $54.40
Availability: Not Available - stock arriving soon
Buy Now from Amazon
Product Information (more info)
CERTAIN CONTENT THAT APPEARS ON THIS SITE COMES FROM AMAZON SERVICES LLC. THIS CONTENT IS PROVIDED 'AS IS' AND IS SUBJECT TO CHANGE OR REMOVAL AT ANY TIME.

All-American athlete, scholar, renowned baritone, stage actor, and social activist, Paul Robeson (1898-1976) was a towering figure and a trailblazer many times over. He made perhaps his biggest impact, however, in the medium of film. The son of an escaped slave, Robeson managed to become a top-billed movie star around the world during the time of Jim Crow America, always striving to use film to educate viewers about equality, democracy, and the rights of workers. Though he eventually left movies behind, using his international celebrity to speak on behalf of those denied their civil liberties and ultimately becoming a victim of ideological persecution himself, Robeson left a film legacy that continues to speak eloquently of the long and difficult journey of a courageous and outspoken African American. DISC ONE - ICON: The Emperor Jones (1933), Paul Robeson: Tribute to an Artist (1979) DISC TWO - OUTSIDER: Body and Soul (1925), Borderline (1930) DISC THREE - PIONEER: Sanders of the River (1935), Jericho (1937) DISC FOUR - CITIZEN OF THE WORLD: The Proud Valley (1940), Native Land (1942) (Image Entertainment)

Paul Robeson is today known for little more than singing "Ol' Man River" in Showboat, but this hefty and potent collection from Criterion (seven movies and a rich trove of documentary features and commentaries) should return Robeson to much-deserved cultural awareness. An imposing, charismatic black actor who demanded respect when most black actors were trapped in mammy and minstrel roles, and a singer whose deep, rolling voice won him acclaim on the concert stages of Europe, Robeson was among the most significant performers of the 20th Century--until the 1950s, when the U.S. government suspended his passport out of fear that Robeson's commitment to social progress and civil rights would project a negative view of America. But even before then, Robeson's career took place outside of the establishment channels of Hollywood. Paul Robeson: Portraits of the Artist includes two silent films (Body and Soul, a melodrama railing against the hypocrisies of the church, made by the pioneering black filmmaker Oscar Micheaux; and Borderline, a startlingly inventive story of an interracial love rectangle, made by film theorist Kenneth Macpherson), both given additional vitality by contemporary jazz scores; three movies from Robeson's rich period in England (Sanders of the Valley, Jericho, and The Proud Valley, which chart both Robeson's rising social conscience and his increasing clout in the industry); Robeson's most significant Hollywood film, The Emperor Jones, adapted from the Eugene O'Neill play that shot Robeson to stardom in the first place; and the movie that probably reflected Robeson's social beliefs more than any, the remarkable and riveting semi-documentary Native Land, which Robeson narrated.

Robeson is one of those rare actors, like Bette Davis or Humphrey Bogart, whose performances drive his movies as much as the director or the screenplay. Much is made of Robeson's powerful voice and intimidating physique, but just as impressive are his piercing eyes; in every role, a questing intelligence bursts through, looking at the world and cutting through charades and illusions. Criterion packages always have phenomenal extras, but Portraits of the Artist is unusually complex because Robeson's life is as important to his stature as his movies. These excellent features capture the world around Robeson, a world that both raised him up and tore him down. Far from a musty historical document, this is a film package that matters, which will reward and surprise viewers used to conventional notions of Hollywood and America. --Bret Fetzer