People on Sunday (The Criterion Collection) 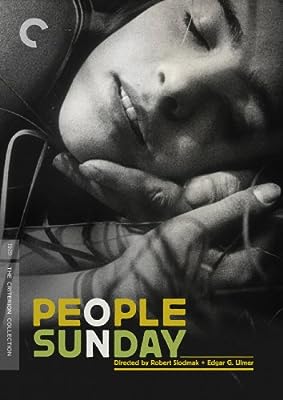 Price: $20.69
As of 2022-10-05 11:57:02 UTC (more info)
Product prices and availability are accurate as of 2022-10-05 11:57:02 UTC and are subject to change. Any price and availability information displayed on http://www.amazon.com/ at the time of purchase will apply to the purchase of this product.
Availability: Not Available - stock arriving soon
Buy Now from Amazon
Product Information (more info)
CERTAIN CONTENT THAT APPEARS ON THIS SITE COMES FROM AMAZON SERVICES LLC. THIS CONTENT IS PROVIDED 'AS IS' AND IS SUBJECT TO CHANGE OR REMOVAL AT ANY TIME.

People on Sunday (Menschen am Sonntag) represents an astonishing confluence of talent—an early collaboration by a group of German filmmakers who would all go on to become major Hollywood players, including eventual noir masters Robert Siodmak (The Killers, Criss Cross) and Edgar G. Ulmer (Detour, Bluebeard) and future Oscar winners Billy Wilder (Sunset Boulevard, Ace in the Hole) and Fred Zinneman (High Noon, A Man for All Seasons). This effervescent, sunlit silent film, about a handful of city dwellers enjoying a weekend outing (a charming cast of nonprofessionals), offers a rare glimpse of Weimar-era Berlin. A unique hybrid of documentary and fictional storytelling, People on Sunday was both an experiment and a mainstream hit that would influence generations of film artists around the world.