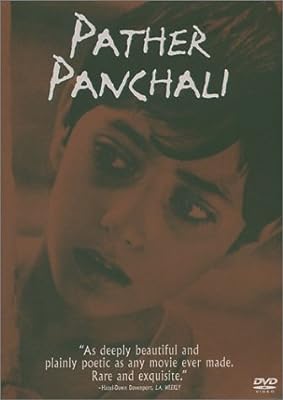 Price: $29.95
As of 2023-02-05 07:03:34 UTC (more info)
Product prices and availability are accurate as of 2023-02-05 07:03:34 UTC and are subject to change. Any price and availability information displayed on http://www.amazon.com/ at the time of purchase will apply to the purchase of this product.
Availability: Not Available - stock arriving soon
Buy Now from Amazon
Product Information (more info)
CERTAIN CONTENT THAT APPEARS ON THIS SITE COMES FROM AMAZON SERVICES LLC. THIS CONTENT IS PROVIDED 'AS IS' AND IS SUBJECT TO CHANGE OR REMOVAL AT ANY TIME.

One of the greatest directors of modern cinema, Satyajit Ray became an instant success with his debut film, PATHER PANCHALI (Song of the Little Road). The first Indian film to ever become a hit in the West, PATHER PANCHALI is the moving story of a rural family cursed with bad luck. Father Hari is adreamer and poet, while his hard-working wife struggles to feed the family. But Durga, a free-spirited and petty thief, brings tragedy to the family in a moment's carelessness. Awarded many prizes atfilm festivals all over the world, PATHER PANCHALI catapulted Satyajit Ray to international acclaimand launched one of the cinema's most distinguished careers.