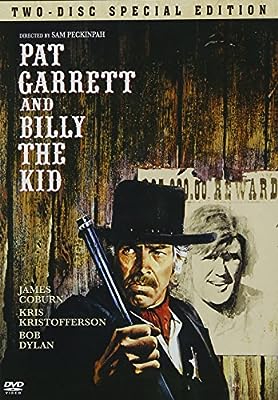 Pat Garrett & Billy the Kid may be the most beautiful and ambitious film that Sam Peckinpah ever made. The time is 1881. Powerful interests want New Mexico tamed for their brand of progress, and Sheriff Pat Garrett (James Coburn) is commissioned to rid the territory of his old gunfighting comrades. He serves fair notice to William Bonney--Billy the Kid (Kris Kristofferson)--and his Fort Sumter cronies, but it's not in their nature, or his, to go quietly. Peckinpah's theme, more than ever, is the closing of the frontier and the nature of the loss that that entails. But this time his vision takes him beyond genre convention, beyond history and legend, to the bleeding heart of myth--and surely of himself.

This is one strange and original movie. In 1973 most American reviewers responded by panning it and deriding its director, whom they saw as having betrayed the promise of Ride the High Country, been swept up in his own cult of violence, and become incoherent as a storyteller. Coherence wasn't helped by MGM's cutting at least a quarter-of-an-hour out of the finished film and removing a bitter, retrospective prelude. Subsequent releases have restored a lot of material, and now there's more widespread appreciation of the depth and power of Peckinpah's achievement.

The cast, teeming with fine character actors, is extraordinary, making the gallery of frontier denizens vivid and resonant. Coburn's Garrett, a man who comes to loathe himself for his mission yet cannot abandon it, is the high-water mark of the actor's career. L.Q. Jones, Luke Askew, Harry Dean Stanton, Jack Elam, and Richard Bright create indelible moments, and Slim Pickens becomes the center of an unforgettably moving scene. The presence of Kristofferson (just starting out as an actor) and Bob Dylan (whose enigmatic role is nearly wordless) nudges us toward recognizing Old West outlawry as an early form of rock stardom--flesh-and-blood gods for a primitive society to feed on. --Richard T. Jameson