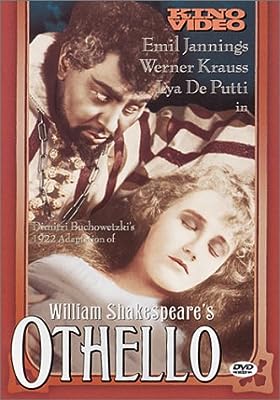 Price: $29.98
As of 2022-10-03 22:23:32 UTC (more info)
Product prices and availability are accurate as of 2022-10-03 22:23:32 UTC and are subject to change. Any price and availability information displayed on http://www.amazon.com/ at the time of purchase will apply to the purchase of this product.
Availability: Not Available - stock arriving soon
Buy Now from Amazon
Product Information (more info)
CERTAIN CONTENT THAT APPEARS ON THIS SITE COMES FROM AMAZON SERVICES LLC. THIS CONTENT IS PROVIDED 'AS IS' AND IS SUBJECT TO CHANGE OR REMOVAL AT ANY TIME.

Directed by Russian expatriate Dimitri Buchowetzki and starring legendary screen actors Emil Jannings (The Last Laugh) and Werner Krauss (The Cabinet of Dr. Caligari), this early version of William Shakespeare's Othello is a fine example of the artistic and technical virtuosity of the German silent cinema. Rather than a literal adaptation of Shakespeare's tragedy, the film is more of a dark thriller in the German tradition. Cavernous chambers and stony battlements cast shadows of impending doom upon Othello (Jannings) and Desdemona (Ica von Lenkeffy) as the mephistophelian Iago (Krauss) dances about them, methodically destroying their happiness and steering them toward their bitter fate with impish delight.

Shakespeare's tragedy proves remarkably versatile in this 1922 adaptation, combining the Bard's passionate melodrama with the rich psychological underpinnings of Germany's silent expressionist cinema. Directed with intelligent economy by Russian expatriate Dimitri Buchowetzki, the film is brimming over with title cards, but only a few of them borrow from Shakespeare verbatim. In both plotting and written dialogue, this is a largely original interpretation, bearing closer resemblance to the 2001 teen drama O than to Shakespeare, emphasizing the ill-fated Moor's descent into jealousy and madness, brought upon him by the scheming Iago, played with delicious villainy by Werner Krauss of The Cabinet of Dr. Caligari fame. As Othello, the legendary Emil Jannings plays to the cheap seats with crazed abandon, his bulging eyes about to burst from their sockets. It's the showmanship of a stage icon, but wholly appropriate to the escalating intensity of Shakespeare's play, the essence of which is admirably retained. --Jeff Shannon