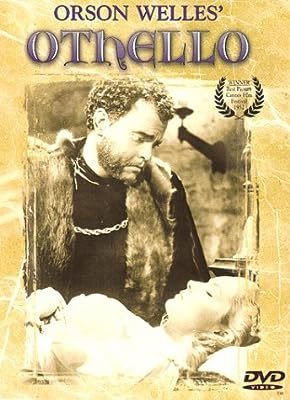 Price: $24.99
As of 2022-10-04 03:58:14 UTC (more info)
Product prices and availability are accurate as of 2022-10-04 03:58:14 UTC and are subject to change. Any price and availability information displayed on http://www.amazon.com/ at the time of purchase will apply to the purchase of this product.
Availability: Not Available - stock arriving soon
Buy Now from Amazon
Product Information (more info)
CERTAIN CONTENT THAT APPEARS ON THIS SITE COMES FROM AMAZON SERVICES LLC. THIS CONTENT IS PROVIDED 'AS IS' AND IS SUBJECT TO CHANGE OR REMOVAL AT ANY TIME.

Orson Welles' daring and visually adventurous production of William Shakespeare's classic play. Welles, one of the greatest directors ever, revered Shakespeare and was determined to bring his own versions of the Bard's work to the silver screen, though the studios resisted the idea. Without studio funding, Welles struggled for three years to make "Othello" with his own money. The film won the Grand Prize at the Cannes Film Festival and critical acclaim but was rarely seen for many years. Over $1 million dollars in restoration work was spent, including re recording the score and re creating the sound effects, as well as updating the audio to digital. "Othello" remains a testament to Welles' legendary genius.