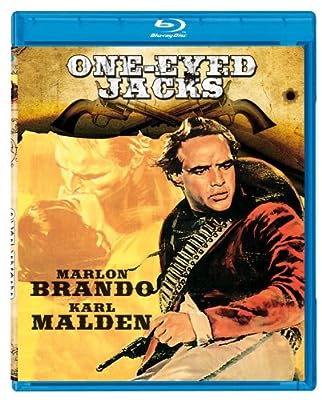 Price: $61.21
As of 2022-12-09 14:24:12 UTC (more info)
Product prices and availability are accurate as of 2022-12-09 14:24:12 UTC and are subject to change. Any price and availability information displayed on http://www.amazon.com/ at the time of purchase will apply to the purchase of this product.
Availability: Not Available - stock arriving soon
Buy Now from Amazon
Product Information (more info)
CERTAIN CONTENT THAT APPEARS ON THIS SITE COMES FROM AMAZON SERVICES LLC. THIS CONTENT IS PROVIDED 'AS IS' AND IS SUBJECT TO CHANGE OR REMOVAL AT ANY TIME.

Running from the law after a bank robbery in Mexico, Dad Longworth finds an opportunity to take the stolen gold and leave his partner Rio to be captured. Years later, Rio escapes from the prison where he has been since, and hunts down Dad for revenge. Dad is now a respectable Sheriff in California, and has been living in fear of Rio's return.

One-Eyed Jacks, Marlon Brando's first and only directing venture, is a stirring Western classic featuring breath-taking cinematography and a magnificent musical score. Not only did Marlon Brando direct this motion picture masterpiece, lauded as Martin Scorsese's favorite Western, but Brando also took on the premiere role of Rio, a man betrayed by Dad Longworth, his one-time partner in crime.

Note: Movie will play in English when selected the same in the Menu.
Go to Menu > Sprache.

Once Upon A Time In The West [Blu-ray]