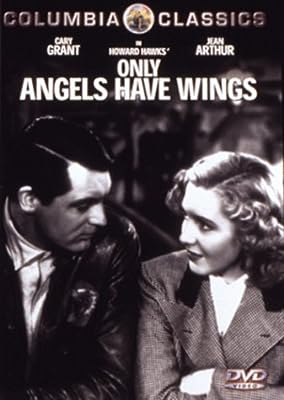 Price: $14.99
As of 2022-11-27 11:59:37 UTC (more info)
Product prices and availability are accurate as of 2022-11-27 11:59:37 UTC and are subject to change. Any price and availability information displayed on http://www.amazon.com/ at the time of purchase will apply to the purchase of this product.
Availability: Not Available - stock arriving soon
Buy Now from Amazon
Product Information (more info)
CERTAIN CONTENT THAT APPEARS ON THIS SITE COMES FROM AMAZON SERVICES LLC. THIS CONTENT IS PROVIDED 'AS IS' AND IS SUBJECT TO CHANGE OR REMOVAL AT ANY TIME.

A two-fisted adventure tale set in South America, ONLY ANGELS HAVE WINGS stars Cary Grant as the tough-talking head of an air freight service operating in the dangerous Andes Mountains. Jean Arthur co-stars as a vacationing showgirl competing with Rita Hayworth for Grant's affections. A potent combination of humor, romance and action, the film was directed by Howard Hawks, the legendary director responsible for Red River, His Girl Friday, Bringing Up Baby, and the original Scarface. A triumph of casting, ONLY ANGELS HAVE WINGS is one of the best examples of Columbia chief Harry Cohn's skill in developing talent. Cary Grant had just been released from his contract with Fox when Cohn, sensingthat the handsome leading man was poised for stardom, turned him into Columbia's most durable star. Jean Arthur was an unexpected veteran of 50 films before Cohn "discovered" something in her that previous studios had overlooked. Teaming her with director Frank Capra, he created one of the finest com