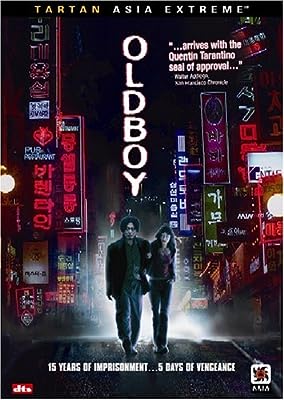 Price: $22.95
As of 2022-09-25 03:34:04 UTC (more info)
Product prices and availability are accurate as of 2022-09-25 03:34:04 UTC and are subject to change. Any price and availability information displayed on http://www.amazon.com/ at the time of purchase will apply to the purchase of this product.
Availability: Not Available - stock arriving soon
Buy Now from Amazon
Product Information (more info)
CERTAIN CONTENT THAT APPEARS ON THIS SITE COMES FROM AMAZON SERVICES LLC. THIS CONTENT IS PROVIDED 'AS IS' AND IS SUBJECT TO CHANGE OR REMOVAL AT ANY TIME.

Oh Dae-su is an ordinary Seoul businessman with a wife and little daughter who, after a drunken night on the town, is abducted and locked up in a strange, private prison. No one will tell him why hes there and who his jailer is and his fury builds to a single-minded focus of revenge. 15 years later, he is unexpectedly freed, given a new suit, a cell-phone and 5 days to discover the mysterious enemy who had him imprisoned. Seeking vengeance on all those involved, he soon finds that his enemys tortures are just beginning.

In the realm of revenge thrillers, you'd be hard pressed to find more ultra-violent vengeance and psycho thrills than in the creepy story of Oldboy. This Korean import made a pop splash at the Cannes Film Festival and during its limited theatrical run thanks to the imprimatur of Quentin Tarantino, who raved about it and its visionary director, Chan-wook Park, to anyone who would listen. It's easy to see why QT fell in love with the grindhouse attitude, fast-paced action, violent imagery, and icy-black humor, but it's a disservice to think of Oldboy as another Tarantino homage or knockoff. The darkly existential undercurrent in the themes that Oldboy traces over its life-long narrative arc is much more complex and deeply disturbing than anything of its kind. The movie's tagline is, "15 years of imprisonment... 5 days of vengeance." The imprisonee is Oh Dae-Su, an ordinary Joe who is snatched off a Seoul street corner and locked away in a dank, windowless fleabag hotel room for the aforementioned 15 years. Just as abruptly he is released, and thus the five days begin. Why did this happen to Oh Dae-Su? Ah, but that would be telling, and in fact we don't know ourselves until the final wrenching scenes.

Oldboy breaks into a classic three-act saga, the first of which details the hallucinatory period of imprisonment in which Oh Dae-Su wades from mild insanity to outright psychosis in the hands of unseen yet attentive captors. Act 2 is the revenge, when an entirely different tone takes over and Oh Dae-Su moves with single-minded purpose and clarity. It's this section that has gained the most notoriety, primarily for the claw-hammer dentistry scene, the one-man-army tracking shot, and the wriggling octopus that Oh Dae-Su consumes in a sushi bar (he's been dead so long he simply needs life back inside him in any way possible). In act 3, answers finally start to emerge and the sinister atmosphere grows even more profound--not without a healthy dose of extra bloodletting, of course. Oldboy is an undeniably poetic masterpiece of tension, fury, and dynamic craft. Ultimately, its epic cycle of tragedy is of the sort that mankind has been inflicting upon itself for all time. Some of the images may be gruesome, but all converge into a kind of beauty. It's in the telling of this lurid tale that these details become one and the memories of pain ultimately heal. --Ted Fry

Once Upon A Time In The West

Of Mice and Men