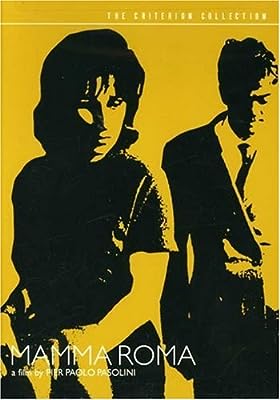 Price: $25.06
As of 2020-02-22 15:55:19 UTC (more info)
Product prices and availability are accurate as of 2020-02-22 15:55:19 UTC and are subject to change. Any price and availability information displayed on http://www.amazon.com/ at the time of purchase will apply to the purchase of this product.
Availability: Not Available - stock arriving soon
Buy Now from Amazon
Product Information (more info)
CERTAIN CONTENT THAT APPEARS ON THIS SITE COMES FROM AMAZON SERVICES LLC. THIS CONTENT IS PROVIDED 'AS IS' AND IS SUBJECT TO CHANGE OR REMOVAL AT ANY TIME.

Anna Magnani is Mamma Roma, a middle-aged prostitute who attempts to extricate herself from her sordid past for the sake of her son. Filmed in the great tradition of Italian neorealism, Mamma Roma offers an unflinching look at the struggle for survival in postwar Italy, and highlights director Pier Paolo Pasolini#s lifelong fascination with the marginalized and dispossessed. Though banned upon its release in Italy for obscenity, today Mamma Roma is considered a classic: a glimpse at a country#s most controversial director in the process of finding his style and a powerhouse performance by one of cinema#s greatest actresses.

Combining the immediacy of Italian neorealism with potent criticism of post-war Italian society, Mamma Roma is one of Pier Paolo Pasolini's most accessible and satisfying films. This was only his second feature, but Pasolini (who was mysteriously murdered in 1975) was already demonstrating a powerful affinity for cinema as a forum for his anti-Fascist ideology. To express his outrage at the spiritual vacancy of vulgar consumerism, Pasolini cast the great Anna Magnani in the title role, a former prostitute struggling to transcend her sordid past in a desperate attempt to give her estranged teenage son the better life she never had. In Pasolini's worldview, Mamma's petit bourgeois idealism can only be doomed, and the film assumes the melodramatic thrust of tragic opera. Like most of Pasolini's films, Mamma Roma attracted controversy, but it was nothing compared to the outcry over "La ricotta," a 35-minute short featuring Orson Welles (part of the 1963 anthology film RoGoPaG, and included here for the first time on DVD). Seized and condemned "for insulting the religion of the state," "La ricotta" presents the crucifixion of Christ as an incendiary criticism of the Catholic Church, in which the actor playing Jesus stuffs himself with ricotta cheese and dies from indigestion on the cross!

As usual, Criterion has done an exemplary job of assembling a wealth of supplementary materials. Pasolini's films demand at least rudimentary understanding of his life and politics, and that background is provided through new interviews with former collaborators, a clip-laden 1995 documentary about Pasolini's career, and a 32-page booklet containing excerpts of interviews from the out-of-print book Pasolini on Pasolini, along with a mini-essay on Mamma Roma that further illuminates the film in the context of Pasolini's controversial career. For anyone interested in Pasolini's art, this two-disc set provides a suitable starting point, offering important films and scholarly study in the esteemed Criterion tradition. --Jeff Shannon