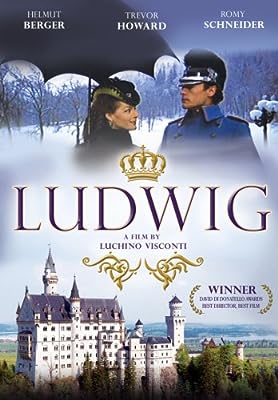 Price: $39.98
As of 2023-02-04 10:44:29 UTC (more info)
Product prices and availability are accurate as of 2023-02-04 10:44:29 UTC and are subject to change. Any price and availability information displayed on http://www.amazon.com/ at the time of purchase will apply to the purchase of this product.
Availability: Not Available - stock arriving soon
Buy Now from Amazon
Product Information (more info)
CERTAIN CONTENT THAT APPEARS ON THIS SITE COMES FROM AMAZON SERVICES LLC. THIS CONTENT IS PROVIDED 'AS IS' AND IS SUBJECT TO CHANGE OR REMOVAL AT ANY TIME.

Director Luchino Visconti (The Leopard, Death in Venice) brings his famed majestic style to this lavish and operatic portrait of Ludwig II (Helmut Berger), the 19th century `mad king' of Bavaria. Tormented by his unrequited love for his cousin, Empress Elisabeth of Austria (Romy Schneider), coupled with his obsession with the music of Wagner (Trevor Howard), Ludwig retreats into a fantasy world - building fairytale castles and ultimately losing his already-fragile grip on his sanity.

Modern movies are short on elegance, but Luchino Visconti's Ludwig has elegance to burn. It's not only the sumptuous and scrupulously realized depiction of 19th century royal ceremony and trappings, which gleam with old world glamor; it's also Visconti's long, fluid scenes and the subtle play of emotions in the faces of beautiful Helmut Berger (as Bavaria's King Ludwig II) and even more beautiful Romy Schneider (as his cousin Elisabeth, Empress of Austria). From his coronation to when he was deposed due to mental illness, Ludwig was a sad, eccentric figure, obsessed with the mythic operas of Wagner (played by Trevor Howard, Brief Encounter) and building fantastic (and woefully expensive) castles. Ludwig follows the monarch's slow collapse with compassion and nuance. The movie is full of odd, languid scenes, such as when Ludwig, lying in bed, has a visiting actor deliver a romantic speech over and over--Berger's haunted face and the buzz of servants constantly tending to his whims make this sequence both comic and unsettling. Many will find this four-hour-long movie hopelessly slow, but Visconti's portrayal of the strange, arid life of royalty--indulged and lavish, yet deprived of meaning--has a hypnotic power. The dvd includes an excellent documentary about Visconti (who also directed The Leopard and White Nights) and another about actress Silvana Mangano (who also appeared in Visconti's Death in Venice). --Bret Fetzer