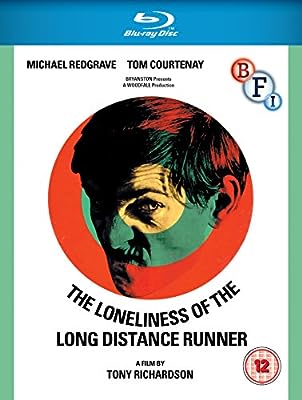 Price: $12.45
As of 2022-10-04 10:53:32 UTC (more info)
Product prices and availability are accurate as of 2022-10-04 10:53:32 UTC and are subject to change. Any price and availability information displayed on http://www.amazon.com/ at the time of purchase will apply to the purchase of this product.
Availability: Not Available - stock arriving soon
Buy Now from Amazon
Product Information (more info)
CERTAIN CONTENT THAT APPEARS ON THIS SITE COMES FROM AMAZON SERVICES LLC. THIS CONTENT IS PROVIDED 'AS IS' AND IS SUBJECT TO CHANGE OR REMOVAL AT ANY TIME.

Import Blu-Ray/Region B. Alan Sillitoe's autobiographical novel about a rebellious 18-year-old living in dreary Lancashire proved to be the perfect material for Tony Richardson to adapt in the early 1960s. The film stars Tom Courtenay as the disaffected Colin Smith, who ends up in a Borstal, or reform school, after robbing a bakery. The Governor (Sir Michael Redgrave), the institution's chief authority, believes in physical training as a means of rehabilitating his charges. Despite his contempt for all authority, Colin one day inadvertently outruns the school's leading long-distance runner, and the Governor immediately assigns him to be trained for an imminent competition with a well-known public school. During his solitary training exercises, Colin flashes back to scenes of his chaotic youth: his father, a blue-collar worker dying of cancer, and his mother, a foul-mouthed harridan, blowing the insurance settlement on a new lover and a new TV. On the day of the big race, the two schools must share a locker room, and Gunthorpe (James Fox), the captain of the opposing team, reflexively wishes Colin good luck. The surprised boy looks at him as though these are the only words of encouragement he's ever received. Courtenay is exceptional in his film debut, exuding the bitterness typical of the director's early 'angry young man' films. Employing jump cuts and undercranked scenes borrowed from the Nouvelle Vague, the film emphasizes the oppressiveness of the boy's environment and the temporary freedom that running offers him.

This Sporting Life (The Criterion Collec...

The Loneliness of the Long Distance Runn...