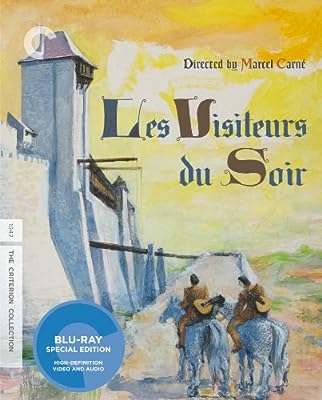 Price: $27.99
As of 2021-10-23 04:53:39 UTC (more info)
Product prices and availability are accurate as of 2021-10-23 04:53:39 UTC and are subject to change. Any price and availability information displayed on http://www.amazon.com/ at the time of purchase will apply to the purchase of this product.
Availability: Not Available - stock arriving soon
Buy Now from Amazon
Product Information (more info)
CERTAIN CONTENT THAT APPEARS ON THIS SITE COMES FROM AMAZON SERVICES LLC. THIS CONTENT IS PROVIDED 'AS IS' AND IS SUBJECT TO CHANGE OR REMOVAL AT ANY TIME.

A work of poetry and dark humor, Les visiteurs du soir is a lyrical medieval fantasy from the great French director Marcel Carné (Children of Paradise). Two strangers (Children of Paradise’s Arletty and La dolce vita’s Alain Cuny), dressed as minstrels, arrive at a castle in advance of court festivities—and it is revealed that they are actually emissaries of the devil himself, dispatched to spread heartbreak and suffering. Their plans, however, are thwarted by an unexpected intrusion: human love. Often interpreted as an allegory for the Nazi occupation of France, during which it was made, Les visiteurs du soir—wittily written by Jacques Prévert (Children of Paradise) and Pierre Laroche (Lumière d’été), and elegantly designed by Alexandre Trauner (Port of Shadows) and shot by Roger Hubert (Children of Paradise)—is a moving and whimsical tale of love conquering all.