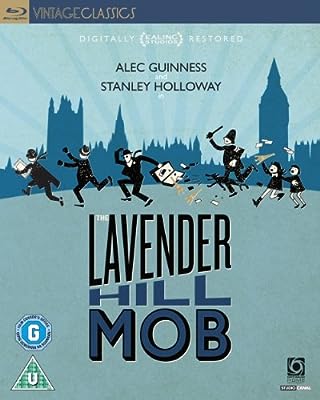 Price: $33.99
As of 2023-02-08 03:29:38 UTC (more info)
Product prices and availability are accurate as of 2023-02-08 03:29:38 UTC and are subject to change. Any price and availability information displayed on http://www.amazon.com/ at the time of purchase will apply to the purchase of this product.
Availability: Not Available - stock arriving soon
Buy Now from Amazon
Product Information (more info)
CERTAIN CONTENT THAT APPEARS ON THIS SITE COMES FROM AMAZON SERVICES LLC. THIS CONTENT IS PROVIDED 'AS IS' AND IS SUBJECT TO CHANGE OR REMOVAL AT ANY TIME.

UK import Blu-ray/Region All pressing. Please note the box is printed as Region B but it is in fact Region All. Holland (Alec Guinness), is a shy retiring man who works as a bank transfer agent for the delivery of gold bullion. One day he befriends Pendlebury (Stanley Holloway), a maker of souvenirs. Holland remarks that, with Pendlebury's smelting equipment, one could forge the gold into harmless-looking toy Eiffel Towers and smuggle the gold into France. Soon after, they gain the services of professional criminals Lackery (Sid James) and Shorty (Alfie Bass) and the four plot their crime, unaware of the pitfalls which lie ahead. An enduring classic from director Charles Crichton, the Lavender Hill Mob features an early screen appearance from Audrey Hepburn and was included on the British Film Institute's list of the 100 Best British Films of the 20th Century. Special features: Behind the Scenes stills gallery, Introduction by Martin Scorsese, Excerpt from BECTU interview with Charles Crichton, Digitally restored trailer and Good Afternoon: Mavis interviews TEB Clarke. Studio Canal. 2011.