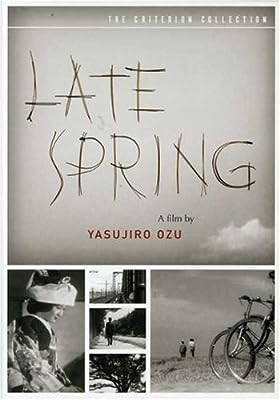 Price: $29.99
As of 2022-11-27 19:54:27 UTC (more info)
Product prices and availability are accurate as of 2022-11-27 19:54:27 UTC and are subject to change. Any price and availability information displayed on http://www.amazon.com/ at the time of purchase will apply to the purchase of this product.
Availability: Not Available - stock arriving soon
Buy Now from Amazon
Product Information (more info)
CERTAIN CONTENT THAT APPEARS ON THIS SITE COMES FROM AMAZON SERVICES LLC. THIS CONTENT IS PROVIDED 'AS IS' AND IS SUBJECT TO CHANGE OR REMOVAL AT ANY TIME.

A widowed professor fakes an impending marriage to spur his adult daughter to get on with her life.

A masterpiece of postwar Japanese cinema, Yasujiro Ozu's Late Spring serves as an elegant primer for many of the themes that would define Ozu's later career. As with other Ozu classics, this is a calm, meditative drama about the dynamics of family, in this case the inevitable separation of 56-year-old father and widower Shukichi (Chishu Ryu) and his adult daughter Noriko (Setsuko Hara), who is content to care for her father and remain unmarried, despite the urging of friends and relatives to find a suitable husband. There are some viable candidates, and several attempts at matchmaking, but the likeliest match is a man who's already engaged. Noriko simply wishes for things to remain as they are, but when she does eventually marry a handsome chemist who "looks like Gary Cooper," Ozu's drama remains intimately focused on the subtle emotions at play; there's not a scene or sequence that feels out of place, and Late Spring serves a secondary function as a light and lively portrait of post-war Japan, as hints of Western influence (like a Coca-Cola sign in one of the film's most memorable scenes) that signal Japan's transition toward a modern commercial economy. Most of all, however, Late Spring is a carefully observed and quietly heartbreaking story of a parent who yearns to set things right for his daughter who must balance her father's love with her own prospects for a fulfilling future. And while Ozu would go on to examine familial issues in later, equally noteworthy films, Late Spring represents a milestone that would ensure Ozu his rightful place among the greatest of all Japanese directors. --Jeff Shannon

On the DVDs
Criterion's release of Late Spring contains a few minor flaws in terms of image quality (such as occasional emulsion scratches), but viewers can rest assured that this DVD was mastered from the finest available materials, and the film looks very good considering the conditions of post-war Japan that were typically harsh on films of that period. The "windowbox" framing format accurately preserves the film's original 1.33:1 aspect ratio. There's a new and improved English subtitle translation, and the audio commentary by Richard Peña (an Ozu expert and program director of New York's Film Society of Lincoln Center) emphasizes the literary traditions that inform Ozu's films, in addition to the director's signature fixed-camera, low-angle style. Disc 2 includes Tokyo-ga, the 1985 feature by German director (and avid Ozu admirer) Wim Wenders. It's a tribute to Ozu's Japan, in which Wenders wanders the city searching for remnants of Tokyo as seen in Ozu's films, including interviews with Late Spring actor Chishu Ryu and Ozu's long-time cameraman Yuharu Atsuta. In keeping with Criterion tradition, a 21-page booklet is also included, containing informative essays by critic Michael Atkinson and renowned Japanese-film historian Donald Richie. --Jeff Shannon