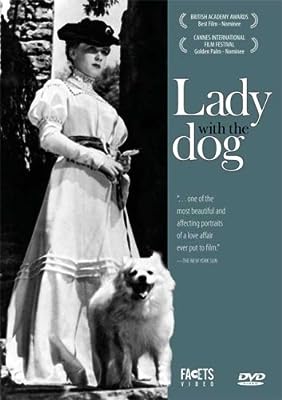 Price: $28.87
As of 2022-12-09 06:07:04 UTC (more info)
Product prices and availability are accurate as of 2022-12-09 06:07:04 UTC and are subject to change. Any price and availability information displayed on http://www.amazon.com/ at the time of purchase will apply to the purchase of this product.
Availability: Not Available - stock arriving soon
Buy Now from Amazon
Product Information (more info)
CERTAIN CONTENT THAT APPEARS ON THIS SITE COMES FROM AMAZON SERVICES LLC. THIS CONTENT IS PROVIDED 'AS IS' AND IS SUBJECT TO CHANGE OR REMOVAL AT ANY TIME.

A faithful adaptation from the short story by Chekhov, LADY WITH THE DOG is a forgotten masterpiece of the Soviet cinema. Told with little dialogue and minimal action, this romantic drama is a bittersweet portrait of a doomed love affair between Dmitri, a bank official, and Anna, a well-to-do young woman. The two fall in love while on vacation in Yalta, but because each is married to someone else, they can see each other only once a year.
Soviet director Iosif Heifitz not only adapts the events of the Chekhov story but captures the legendary writer s restrained tone and atmosphere of desperation. This is a tale of grand passion from another time and another place.