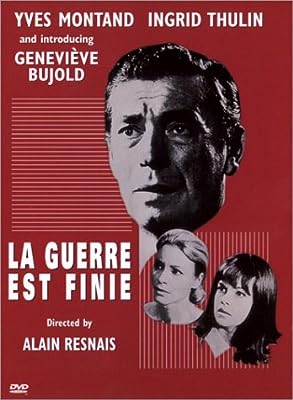 Price: $99.95
As of 2021-10-23 12:01:29 UTC (more info)
Product prices and availability are accurate as of 2021-10-23 12:01:29 UTC and are subject to change. Any price and availability information displayed on http://www.amazon.com/ at the time of purchase will apply to the purchase of this product.
Availability: Not Available - stock arriving soon
Buy Now from Amazon
Product Information (more info)
CERTAIN CONTENT THAT APPEARS ON THIS SITE COMES FROM AMAZON SERVICES LLC. THIS CONTENT IS PROVIDED 'AS IS' AND IS SUBJECT TO CHANGE OR REMOVAL AT ANY TIME.

For some soldiers, the war is never over... Legendary "New Wave" director Alain Resnais (Last Year at Marienbad) helms this emotionally-charged suspense-drama set in France and on the streets of fascist Spain, starring European film icon Yves Montand (Jean de Florette), a young Genevieve Bujold (Coma) in one of her first screen appearances, and the radiant Ingrid Thulin (Wild Strawberries). Montand is an aging revolutionary learning to accept that the fight for freedom should be passed to younger hands until a chance encounter with a student terrorist revives his militant passions, but catastrophe stalks Montand on his unswerving path to his last mission and a fateful choice.