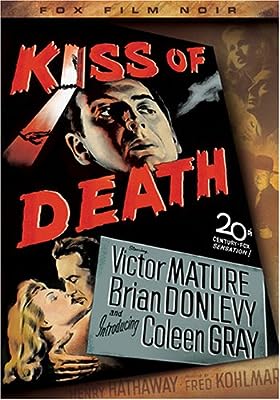 Henry Hathaway's directorial skills brought a heightened sense of realism to crime dramas in this classic 1947 original that marked Richard Widmark's Oscar -nominated debut. When a small time crook (Victor Mature) gets a twenty year sentence for robbery, he refuses to reveal his accomplices, even after a D.A. (Brian Donlevy) offers to help him. But he changes his mind once he learns that his wife has committed suicide and a psychopath (Widmark) has threatened his children.

Richard Widmark's bravura debut as snickering gangster Tommy Udo, and particularly his infamous encounter with an old woman in a wheelchair, enjoys such pop cachet that the movie itself has been somewhat underrated. More's the pity. Henry Hathaway's third entry in 20th Century–Fox's series of post–WWII thrillers is just about the best of the bunch. These films incorporated the semidocumentary techniques and wondrously persuasive on-location shooting Hollywood learned from Italian neorealism and the wartime filming of some of its own best directors. Kiss of Death is more fictional than documentary in thrust, with a solid script by ace screenwriters Ben Hecht and Charles Lederer. But that only makes its imaginative, atmospheric use of real places and spaces--e.g., a superb opening robbery sequence in a New York skyscraper--the more remarkable.

Victor Mature belies his rep as one of the Hollywood star system's bad jokes with his intense performance as Nick Bianco, a career criminal driven to turn squealer. Nick's motivation is family values: although he had gone to Sing Sing (yes, they filmed there, too) as a stand-up guy, "the boys" failed to take care of his wife and daughters as promised, with devastating results. Despite the best efforts of an assistant D.A. (Brian Donlevy), Nick is forced to lay everything on the line to rescue his family's future. The movie abounds in evocative texture, thanks to the no-frills excellence of Norbert Brodine's camerawork and an exemplary supporting cast including Millard Mitchell (as a sardonic police detective), Karl Malden (another D.A.), and Taylor Holmes (a flannel-mouthed Mob shyster). Kiss of Death was remade twice, as a Western titled The Fiend That Walked the West and as a straight thriller again in the '90s. --Richard T. Jameson

Koyaanisqatsi - Life Out of Balance