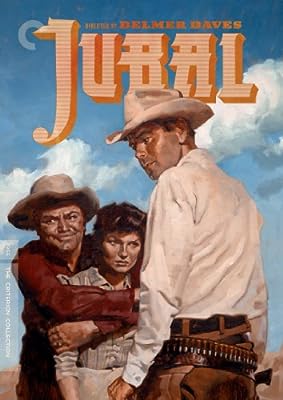 Price: $12.97
As of 2022-12-09 03:20:05 UTC (more info)
Product prices and availability are accurate as of 2022-12-09 03:20:05 UTC and are subject to change. Any price and availability information displayed on http://www.amazon.com/ at the time of purchase will apply to the purchase of this product.
Availability: Not Available - stock arriving soon
Buy Now from Amazon
Product Information (more info)
CERTAIN CONTENT THAT APPEARS ON THIS SITE COMES FROM AMAZON SERVICES LLC. THIS CONTENT IS PROVIDED 'AS IS' AND IS SUBJECT TO CHANGE OR REMOVAL AT ANY TIME.

A trio of exceptional performances from Glenn Ford (3:10 to Yuma), Ernest Borgnine (Marty), and Rod Steiger (On the Waterfront) form the center of JUBAL, an overlooked Hollywood treasure from genre master Delmer Daves (3:10 to Yuma). In this Shakespearean tale of jealousy and betrayal, Ford is an honorable itinerant cattleman, befriended and hired by Borgnine’s bighearted ranch owner despite his unwillingness to talk about his past. When the new hand becomes the target of the flirtatious attentions of the owner’s bored wife (Valerie French) and is entrusted by the boss with a foreman’s responsibilities, his presence at the ranch starts to rankle his shifty fellow cowhand, played by Steiger. The resulting emotional showdown imparts unparalleled psychology intensity to this western, a vivid melodrama featuring expressive location photography in Technicolor and CinemaScope.

Jayne Mansfield Collection (The Girl Can...