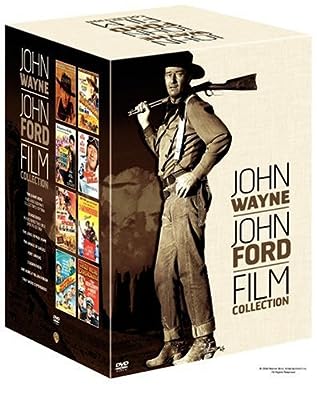 Price: $71.47
As of 2023-02-01 00:07:56 UTC (more info)
Product prices and availability are accurate as of 2023-02-01 00:07:56 UTC and are subject to change. Any price and availability information displayed on http://www.amazon.com/ at the time of purchase will apply to the purchase of this product.
Availability: Not Available - stock arriving soon
Buy Now from Amazon
Product Information (more info)
CERTAIN CONTENT THAT APPEARS ON THIS SITE COMES FROM AMAZON SERVICES LLC. THIS CONTENT IS PROVIDED 'AS IS' AND IS SUBJECT TO CHANGE OR REMOVAL AT ANY TIME.

John Ford was easily one of the greatest, most prolific and versatile directors Hollywood ever produced. Combined with a star of the caliber and magnetism of John Wayne, what emerges is pure cinematic magic. WHV now introduces a ten-disc set featuring eight of the team's finest collaborations: The Searchers: Ultimate Collector's Edition (1956) Stagecoach: Special Edition (1939) Fort Apache (1948) The Long Voyage Home (1940) Wings of Eagles (1957) She Wore a Yellow Ribbon (1948) They Were Expendable (1945) 3 Godfathers (1948)

There may be no better representation of America's love of the old West than the 10-disc John Ford-John Wayne Collection. The iconic star and iconic director collaborated on 14 films, eight of which appear here. Four--Fort Apache (1948), The Long Voyage Home (1940), The Wings of Eagles (1957), and 3 Godfathers (1948)--are appearing for the first time on DVD, and the two most famous, Stagecoach (1939) and The Searchers (1956), are represented in brand-new two-disc editions that add new and old featurettes as well as the outstanding American Masters documentary John Ford/John Wayne: The Filmmaker and the Legend. (This Ultimate Edition of The Searchers adds a variety of printed materials as well, such as reproductions of press materials and a 1956 comic book.) Two other landmark films previously available on DVD, They Were Expendable (1945) and She Wore a Yellow Ribbon (1949), round out the set. The three non-Westerns in the set have military settings, with They Were Expendable arguably the greatest World War II picture ever.

The Movies:
A favorite film of some of the world's greatest filmmakers, including Martin Scorsese and Steven Spielberg, John Ford's The Searchers has earned its place in the legacy of great American films for a variety of reasons. Perhaps most notably, it's the definitive role for John Wayne as an icon of the classic Western--the hero (or antihero) who must stand alone according to the unwritten code of the West. The story takes place in Texas in 1868; Wayne plays Ethan Edwards, a Confederate veteran who visits his brother and sister-in-law at their ranch and is horrified when they are killed by marauding Comanches. Ethan's search for a surviving niece (played by young Natalie Wood) becomes an all-consuming obsession. With the help of a family friend (Jeffrey Hunter) who is himself part Cherokee, Ethan hits the trail on a five-year quest for revenge. At the peak of his masterful talent, director Ford crafts this classic tale as an embittered examination of racism and blind hatred, provoking Wayne to give one of the best performances of his career. As with many of Ford's classic Westerns, The Searchers must contend with revisionism in its stereotypical treatment of "savage" Native Americans, and the film's visual beauty (the final shot is one of the great images in all of Western culture) is compromised by some uneven performances and stilted dialogue. Still, this is undeniably one of the greatest Westerns ever made.

The landmark Western Stagecoach began the legendary relationship between Ford and Wayne, and became the standard for all subsequent Westerns. It solidified Ford as a major director and established Wayne as a charismatic screen presence. Seen today, Stagecoach still impresses as the first mature instance of a Western that is both mythic and poetic. The story about a cross-section of troubled passengers unraveling under the strain of Indian attack contains all of Ford's incomparable storytelling trademarks--particularly swift action and social introspection--underscored by the painterly landscape of Monument Valley. And what an ensemble of actors: Thomas Mitchell (who won a Best Supporting Actor Oscar as the drunken doctor), Claire Trevor, Donald Meek, Andy Devine, and the magical John Carradine.

Fort Apache stars Wayne as a Cavalry officer used to doing things a certain way out West at Fort Apache. Along comes a rigid, new commanding officer (Henry Fonda) who insists that everything on his watch be done by the book, including dealings with local Indians. The results are mixed: greater discipline at the fort, but increased hostilities with the natives. Ford deliberately leaves judgments about the wisdom of these changes ambiguous, but he also allows plenty of room for the fullness of life among the soldiers and their families to blossom. Fonda, in an unusual role for him, is stern and formal as the new man in charge; Wayne is heroic as the rebellious second; Victor McLaglen provides comic relief; and Ward Bond is a paragon of sturdy and sentimental masculinity. All of this is set against the magnificent, poetic topography of Monument Valley. This is easily one of the greatest of American films.

She Wore a Yellow Ribbon, the second installment of Ford's famous cavalry trilogy (which also includes Fort Apache and Rio Grande), continues the director's fascination with history's obliteration of the past. It features one of John Wayne's more sensitive performances as Capt. Nathan Brittles, a stern yet sentimental war horse who has difficulty preparing for his impending military retirement. It's a film about honor and duty as well as loneliness and mortality. And Oscar-winner Winton C. Hoch beautifully photographs it in Remington-like Technicolor tones. The combination of melancholy and farce (Victor McLaglen makes a perfect court jester) evokes comparisons to Shakespeare. Best of all, the scene in which Wayne fights back tears when receiving a gold watch from his troops is unforgettably bittersweet. If you view the whole trilogy, it actually makes sense to save this for last.

It's hardly shameful that Three Godfathers ranks as the slightest John Ford Western in a five-year arc that includes My Darling Clementine, Fort Apache, She Wore a Yellow Ribbon, Wagon Master, and Rio Grande. The story had already been filmed at least five times--once by Ford himself. Just before Christmas, three workaday outlaws (John Wayne, Pedro Armendáriz, Harry Carey Jr.) rob a bank and flee into the desert. The canny town marshal (Ward Bond) moves swiftly to cut them off from the wells along their escape route, so they make for another, deep in the wasteland. There's no water waiting for them, but there is a woman (Mildred Natwick) on the verge of death--and also of giving birth. The three badmen accept her dying commission as godfathers to the newborn. Motley variants of the Three Wise Men, they strike out for the town of New Jerusalem with her Bible as roadmap. Ford's is the softest retelling of the tale, but it's all played with great gusto and tenderness--especially by Wayne, who's rarely been more appealing. Visually the film is one knockout shot after another. This was Ford's first Western in Technicolor, as well as his first collaboration with cinematographer Winton Hoch. What they do with sand ripples and shadows and long plumes of train smoke is rapturously beautiful. It's also often too arty by half, but who can blame them?

Eugene O'Neill loved The Long Voyage Home, the feature-length adaptation of his one-act sea plays, with intelligent bridging material written by Dudley Nichols and a final movement, both hellish and elegiac, appropriate to the onset of World War II. John Ford directed, in his more self-consciously arty vein but with no loss of power or passion. The focus is on the working seamen aboard a merchant ship making its way from the Caribbean to New York harbor and then England, with dangerous cargo on the transatlantic leg. Thomas Mitchell (who had won a 1939 Oscar in Ford's Stagecoach) gives a career-best performance as Driscoll; Ian Hunter plays the enigmatic shipmate known only as "Smitty"; Ford regulars Barry Fitzgerald, John Qualen, Ward Bond, Arthur Shields, and Joseph Sawyer fill key roles; and the top-billed John Wayne contributes a surprisingly effective supporting performance as Ole, a gentle Swedish giant who really belongs on a farm somewhere. Although neglected in recent years, this movie has a permanent place of honor in one of the most amazing three-year creative streaks any director ever had.

John Ford had a big emotional investment in The Wings of Eagles, and his favorite star John Wayne rewarded the director with one of his strongest performances. The subject is Frank "Spig" Wead, Naval aviation legend turned Hollywood screenwriter, who had written Ford's very good 1932 movie Air Mail and his magnificent WWII elegy They Were Expendable (1945). Ford was fond of exploring the theme of "victory in defeat." Wead's life was made to order for that. The hell-raising flyboy shenanigans, and his flailing marriage to a scrappy Irish redhead (The Quiet Man's Maureen O'Hara reporting for duty), were abruptly curtailed by a fall that left him with severe spinal damage. He should never have been able to walk again, but he fought his way back to limited mobility and built a new career as a writer. And when WWII broke out, Wead made a key contribution to the Pacific air war. It would be satisfying to report that The Wings of Eagles is a triumph--that the broad comedy of the early reels cuts brilliantly against the raw pain of the Weads' marriage, the grief of a family broken and mended and broken again, the film's specters of death and deep frustration. There are powerful moments, but the low comedy is very low, the visual style sometimes stark but more often just drab, and the screenplay is very choppy about the passage of time.

They Were Expendable is the greatest American film of the Second World War, made by America's greatest director, John Ford, who himself saw action from the Battle of Midway through D-day. Yet it's been oddly neglected. Or perhaps not so oddly: for as the matter-of-fact title implies, the film commemorates a period, from the eve of Pearl Harbor up to the impending fall of Bataan, when the Japanese conquest of the Pacific was in full cry and U.S. forces were fighting a desperate holding action. Although stirring movies had been made about these early days, they were gung ho in their resolve to see the tables turned. They Were Expendable, however, which was made when Allied victory was all but assured, is profoundly elegiac, with the patient grandeur of a tragic poem. "They" are the officers and men of the Navy's PT boat service, an experimental motor-torpedo force relegated to courier duty on Manila Bay but eventually proven effective in combat. Their commander is played by Robert Montgomery, who actually served on a PT and later commanded a destroyer at Normandy (he also codirected the breathtaking second-unit action sequences). John Wayne's costarring role as Montgomery's volatile second-in-command initially looks stereotypically blustery, but as the drama unfolds, Wayne sounds notes of tenderness and vulnerability that will take Duke-bashers by surprise. They Were Expendable is a heartbreakingly beautiful film, full of astonishing images of warfare, grief, courage, and dignity. This is a masterpiece.