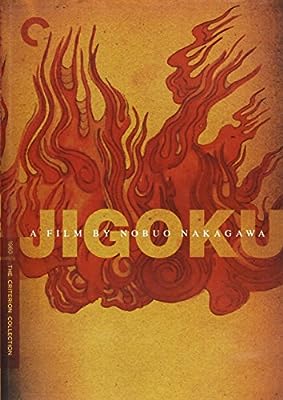 Price: $29.95
As of 2023-02-03 13:04:43 UTC (more info)
Product prices and availability are accurate as of 2023-02-03 13:04:43 UTC and are subject to change. Any price and availability information displayed on http://www.amazon.com/ at the time of purchase will apply to the purchase of this product.
Availability: Not Available - stock arriving soon
Buy Now from Amazon
Product Information (more info)
CERTAIN CONTENT THAT APPEARS ON THIS SITE COMES FROM AMAZON SERVICES LLC. THIS CONTENT IS PROVIDED 'AS IS' AND IS SUBJECT TO CHANGE OR REMOVAL AT ANY TIME.

Shocking, outrageous, and poetic, Jigoku (Hell) is the most innovative creation from Nobuo Nakagawa, the father of the Japanese horror film. After a young theology student flees a hit-and-run accident, he is plagued by both his own guilt-ridden conscience and a mysterious, diabolical doppelganger. But all possible escape routes lead to Hell - literally. In the gloriously gory final third of the film, Nakagawa offers up his vision of the underworld in a tour-de-force of torture and degradation. A striking departure from traditional Japanese ghost stories thanks to its truly eye-popping (and gouging) imagery, Jigoku created aftershocks that are still reverberating in cinema around the world today.

As long as human beings have conceived of an underworld, they have sought to represent it in art. Nobuo Nakagawa's 1960 film Jigoku joins this artistic niche alongside Dante's Inferno and Monkeybone starring the great Brendan Fraser. The story, meant primarily to provide a frame from which to hang a series of creepy set designs, concerns a college student, Shiro Shimizu (Shigeru Amachi) who flees a hit-and-run accident. Even though he wasn't the one driving, Shiro is plagued with guilt, which begins to interfere with his courtship of Yukiko (Utako Mitsuya), whose father just happens to be a theology professor who lectures on Buddhist concepts of Hell. The first half of the film sets the stage for the cast's decent into Hell, where things start to get really freaky. Lit with sickly blue and red light, Nakagawa's vision of the afterworld is bleak and expressionistic. In one scene, lovers struggle to come together across a field of jagged glass shards. In another, the damned run across fields of wriggling hands and feet. Perhaps most disturbing, many of those condemned to an eternity of suffering find their heads and wrists shackled in what appear to be boards in the shape of coffin lids. It's no wonder audiences of the time were scared witless. For a contemporary viewer, however, it's easier to observe the film as an exercise in creative cinematography and a precursor to the J-horror genre. More than the imagery, it’s this subgenre's roots in spirituality that give it the power to chill, with the implication that we bring torture upon ourselves with our own moral violations.

The Criterion Collection does its usual fine job presenting the disc with plenty of extras. The "Building the Inferno" featurette is an amusing glimpse into the working methods of the enigmatic--and hard-drinking--Nakagawa, considered by many in Japan a third-tier director. It's hard to tell whether the transfer itself or the original film is too dark--one is inclined to believe the latter; many of the pre-Hell scenes are blackened to the point of making it hard to see who's doing what. But no one should expect anything light and sunny from this DVD. --Ryan Boudinot