John Cassavetes: Five Films (Shadows / Faces / A Woman Under the Influence / The Killing of a Chinese Bookie / Opening Night ) (The Criterion Collection) 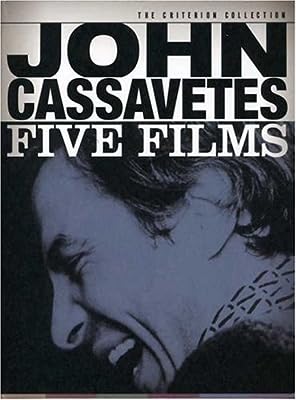 Price: $124.95
As of 2022-11-27 17:40:22 UTC (more info)
Product prices and availability are accurate as of 2022-11-27 17:40:22 UTC and are subject to change. Any price and availability information displayed on http://www.amazon.com/ at the time of purchase will apply to the purchase of this product.
Availability: Not Available - stock arriving soon
Buy Now from Amazon
Product Information (more info)
CERTAIN CONTENT THAT APPEARS ON THIS SITE COMES FROM AMAZON SERVICES LLC. THIS CONTENT IS PROVIDED 'AS IS' AND IS SUBJECT TO CHANGE OR REMOVAL AT ANY TIME.

This boxed set includes the following titles: • Shadows (1959) 81 min. B&W. 1.33:1 aspect ratio • Faces (1968) 130 min. B&W. 1.66:1 aspect ratio • A Woman Under the Influence (1974) 147 min. Color. 1.85:1 aspect ratio • The Killing of a Chinese Bookie (1976) 135 min. Color. 1.85:1 aspect ratio • Opening Night (1977) 144 min. Color. 1.66:1 aspect ratio • A Constant Forge (2000) 200 min. Color. 1.33:1 aspect ratio John Cassavetes has been called a genius, a visionary, and the father of independent film. But all this rhetoric threatens to obscure the humanism and generosity of his art. The five films included here represent his self-financed works made outside the studio system of Hollywood, on which he was afforded complete control. While about beatniks, hippies, businessmen, actors, housewives, strippers, club owners, gangsters, and children, all of them are beautiful, emotional testaments to compassion. Cassavetes has often been called an actor's director, but this body of work—astoundingly, even greater than the sum of its extraordinarily significant parts—reveals him to be an audience's director. The Criterion Collection is proud to present Shadows, Faces, A Woman Under the Influence, The Killing of a Chinese Bookie, and Opening Night in stunning new transfers. Includes Charles Kiselyak's A Constant Forge, a candid biographical documentary on the life and work of Cassavetes .

Improvised by the cast, shot in black and white, John Cassavetes's first independent feature, Shadows, looked like no other film of its time. Cassavetes, seeking to both deal with social issues and create a new kind of cinema, told a story about a family of black siblings in Manhattan trying to make ends meet. Though it meanders at times, it features the kind of spontaneous emotion Cassavetes most wanted to elicit in his films.

A sensation in 1968, Faces earned Oscar nominations for actors Seymour Cassel and Lynn Carlin. Improvised and shot in an edgy, hand-held fashion, the film examines the disintegration of the marriage of a couple in mid-life doldrums. Each seeks solace elsewhere: husband John Marley with prostitute Gena Rowlands, wife Carlin with a free spirit played by Cassel. But neither finds anything approaching the fulfillment they feel is missing from the marriage. Indeed, in Cassavetes's probe of raw emotions, these people discover that, just maybe, the problem lies not with their spouse but with themselves.

The long, free-form drama A Woman Under the Influence is best appreciated as a good showcase for Rowlands, playing a woman whose sanity literally appears to be shattering as different aspects of her personality eclipse others at various times. Peter Falk plays her struggling, blue-collar husband, trying to understand the phenomenon and sometimes losing his patience. As with most of Cassavetes's works as a director, one can't help but find one's attention drifting in and out, but Rowland's performance is a key reason the film has been declared a "national treasure" by the Library of Congress.

The title of The Killing of a Chinese Bookie is the only commercial element in this fascinating character study by writer-director Cassavetes, who once again finds his cinematic soulmate in actor Ben Gazzara. The film uses verité technique to tell the story of Cosmo Vitelli (Gazzara), a Hollywood strip-club owner whose growing debt to a local gangster can only be erased if he agrees to kill a rival Chinese gangster. As usual, Cassavetes employs his favorite actors (including Seymour Cassel and the fearsome Timothy Carey) and vivid improvisation to give Chinese Bookie a tense atmosphere of emotional urgency.

Gena Rowlands stars in Opening Night, Cassavetes's drama of an aging, alcoholic stage actress in the days leading up to her latest Broadway opening. Like all of her collaborations with her writer-director husband, Rowlands is a woman on the verge of collapse, this time a lonely alcoholic whose very life is a performance. Overlong at 144 minutes, the film's long, loose scenes build through uncomfortable small talk and slow, tentative confrontations. Some of the scenes are edgy and thrilling, though many find this facet of Cassavetes pretentious and self-indulgent. Ultimately it's a matter of taste: if you like his style, you'll love this discomforting drama.

The eight-disc Criterion Collection set is filled out with the 2000 documentary A Constant Forge: The Life and Art of John Cassavetes, plus numerous interviews, a second version of The Killing of a Chinese Bookie, a commentary track for A Woman Under the Influence, a 68-page book, and various other features.