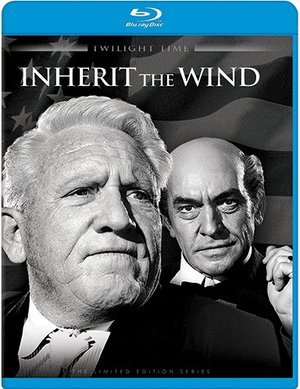 Price: $34.95
As of 2022-10-04 20:19:11 UTC (more info)
Product prices and availability are accurate as of 2022-10-04 20:19:11 UTC and are subject to change. Any price and availability information displayed on http://www.amazon.com/ at the time of purchase will apply to the purchase of this product.
Availability: Not Available - stock arriving soon
Buy Now from Amazon
Product Information (more info)
CERTAIN CONTENT THAT APPEARS ON THIS SITE COMES FROM AMAZON SERVICES LLC. THIS CONTENT IS PROVIDED 'AS IS' AND IS SUBJECT TO CHANGE OR REMOVAL AT ANY TIME.

Producer-director Stanley Kramer's Inherit the Wind (1960) is a classic courtroom drama based on the real-life Scopes "Monkey" Trial of 1925. Here, a Clarence Darrow-like defense attorney (Spencer Tracy) faces off against a fundamentalist prosecutor (Fredric March) in the case of a young schoolteacher (Dick York) brought to trial for breaking a "wicked law" (in the words of Tracy's civil libertarian lawyer) that forbids the teaching of evolution in local public schools. Creationism versus evolution is the still-relevant theme of the film, which passionately asserts "the right to think." Nominated for four Academy AwardsÂ®.