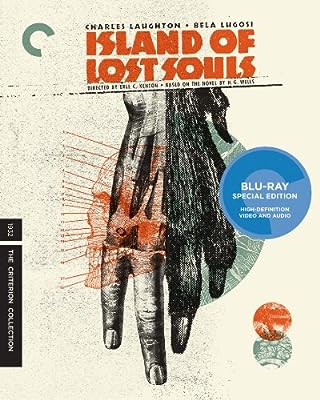 Price: $24.02
As of 2022-10-05 17:15:22 UTC (more info)
Product prices and availability are accurate as of 2022-10-05 17:15:22 UTC and are subject to change. Any price and availability information displayed on http://www.amazon.com/ at the time of purchase will apply to the purchase of this product.
Availability: Not Available - stock arriving soon
Buy Now from Amazon
Product Information (more info)
CERTAIN CONTENT THAT APPEARS ON THIS SITE COMES FROM AMAZON SERVICES LLC. THIS CONTENT IS PROVIDED 'AS IS' AND IS SUBJECT TO CHANGE OR REMOVAL AT ANY TIME.

A twisted treasure from Hollywood’s pre-Code horror heyday, Island of Lost Souls is a cautionary tale of science run amok adapted from H. G. Wells’s novel The Island of Dr. Moreau. In one of his first major movie roles, Charles Laughton (The Private Life of Henry VIII) is a mad doctor conducting ghastly genetic experiments on a remote island in the South Seas, much to the fear and disgust of the shipwrecked sailor (Richard Arlen) who finds himself trapped there. This touchstone of movie terror, directed by Erle C. Kenton (House of Frankenstein), is elegantly shot by Karl Struss (The Great Dictator), features groundbreaking makeup effects that inspired generations of monster-movie artists, and costars Bela Lugosi (Dracula) in one his most gruesome roles.

I Married a Witch (Criterion Collection)...