In the Heat of the Night (40th Anniversary Collector's Edition) 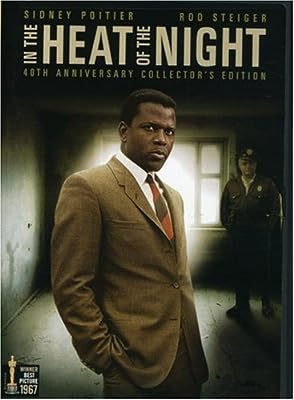 Price: $9.96
As of 2023-02-03 15:54:17 UTC (more info)
Product prices and availability are accurate as of 2023-02-03 15:54:17 UTC and are subject to change. Any price and availability information displayed on http://www.amazon.com/ at the time of purchase will apply to the purchase of this product.
Availability: Not Available - stock arriving soon
Buy Now from Amazon
Product Information (more info)
CERTAIN CONTENT THAT APPEARS ON THIS SITE COMES FROM AMAZON SERVICES LLC. THIS CONTENT IS PROVIDED 'AS IS' AND IS SUBJECT TO CHANGE OR REMOVAL AT ANY TIME.

Both riveting murder mystery and classic fish-out-of-water yarn, Norman Jewison's Oscar-winning In the Heat of the Night represents Hollywood at its wiliest, cloaking exposé in the most entertaining trappings. Sidney Poitier and Rod Steiger prove the decade's most formidable antagonists. Poitier plays Virgil Tibbs, an arrogant homicide detective waylaid in Sparta, Mississippi; Steiger, in his bravura Oscar-winning turn, is Bill Gillespie, the town's hardheaded, bigoted sheriff who first arrests Tibbs for murder and then begs for his expertise. As the clues and suspects mount, Gillespie and his deputies develop begrudging respect for the black officer. The first-rate supporting cast includes Lee Grant as the victim's angry widow, Warren Oates as a voyeuristic deputy, William Schallert as the pragmatic mayor, and, in his screen debut, Scott Wilson (In Cold Blood) as an unlucky fugitive. The brilliant widescreen cinematography is by Haskell Wexler, and the scat-music score is by Quincy Jones. Ray Charles wails the blues theme song. --Glenn Lovell