How To Get Ahead in Advertising (The Criterion Collection) 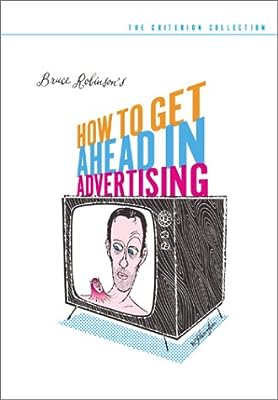 Price: $29.95
As of 2022-11-27 17:39:18 UTC (more info)
Product prices and availability are accurate as of 2022-11-27 17:39:18 UTC and are subject to change. Any price and availability information displayed on http://www.amazon.com/ at the time of purchase will apply to the purchase of this product.
Availability: Not Available - stock arriving soon
Buy Now from Amazon
Product Information (more info)
CERTAIN CONTENT THAT APPEARS ON THIS SITE COMES FROM AMAZON SERVICES LLC. THIS CONTENT IS PROVIDED 'AS IS' AND IS SUBJECT TO CHANGE OR REMOVAL AT ANY TIME.

Richard E. Grant is the endlessly suave Dennis Bagley, a high-strung advertising executive whose shoulder sprouts an evil, talking boil. The boil speaks only to Bagley, is silent to the rest of the world, and seems to be growing. This caustic satire reunites the talented team behind the cult classic Withnail and I to create a tour de force of verbal jousting and physical comedy.

After the release of Withnail & I, British writer-director Bruce Robinson continued his satirical assault on British culture with this fiendishly funny rant, the title of which can be taken figuratively and literally as an object lesson in the art of consumer manipulation. Nobody dupes consumers better than Dennis Bagley (Richard E. Grant); his genius in crafting seductive ad campaigns has earned him a country estate, countless awards, an admiring boss, a loving wife (Rachel Ward), and, well, a gigantic boil on his shoulder that's like a throbbing zit from hell. Dennis is so tormented by a difficult campaign for pimple cream--and so filled with self-loathing after years of promoting dubious products--that his inner demon, the media-savvy and profiteering side of himself, has manifested itself as a talking pustule with a mind (and a face and a voice) of its own.

Robinson's scathing critique of mindless consumerism begins with one of the funniest monologues ever written, and Grant instantly claims his role with manic perfection. A time bomb of repressed anxiety, Dennis blossoms in righteous protest against his profession, only to find his evil boil growing dominant, worrying his wife (Ward's performance is charmingly sympathetic), and inevitably seizing control. The movie's message is obvious and heavy-handed, and Robinson's blazing wit grows increasingly bilious and urgent, but you can't blame him for sniping at easy targets. As corporate synergy and rampant commercialism reach insane proportions, How to Get Ahead in Advertising grows more relevant than ever, holding a mirror to the grotesqueries of capitalism in extremis. --Jeff Shannon