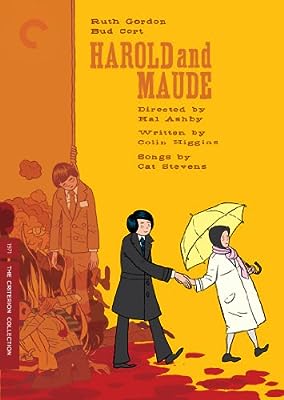 Price: $22.99
As of 2022-11-27 15:10:01 UTC (more info)
Product prices and availability are accurate as of 2022-11-27 15:10:01 UTC and are subject to change. Any price and availability information displayed on http://www.amazon.com/ at the time of purchase will apply to the purchase of this product.
Availability: Not Available - stock arriving soon
Buy Now from Amazon
Product Information (more info)
CERTAIN CONTENT THAT APPEARS ON THIS SITE COMES FROM AMAZON SERVICES LLC. THIS CONTENT IS PROVIDED 'AS IS' AND IS SUBJECT TO CHANGE OR REMOVAL AT ANY TIME.

With the idiosyncratic American fable Harold and Maude, countercultural director Hal Ashby (Being There) fashioned what would become the cult classic of its era. Working from a script by Colin Higgins (9 to 5), Ashby tells the story of the emotional and romantic bond between a death-obsessed young man (The Life Aquatic with Steve Zissou’s Bud Cort) from a wealthy family and a devil-may-care, bohemian octogenarian (Rosemary’s Baby’s Ruth Gordon). Equal parts gallows humor and romantic innocence, Harold and Maude dissolves the line between darkness and light along with the ones that separate people by class, gender, and age, and it features indelible performances and a remarkable soundtrack by Cat Stevens.