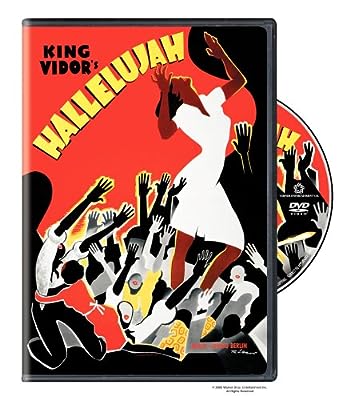 Price: $18.45
Availability: Not Available - stock arriving soon
Buy Now from Amazon
Product Information (more info)
CERTAIN CONTENT THAT APPEARS ON THIS SITE COMES FROM AMAZON SERVICES LLC. THIS CONTENT IS PROVIDED 'AS IS' AND IS SUBJECT TO CHANGE OR REMOVAL AT ANY TIME.

Hallelujah is a cinematic milestone: the first all-black feature from a major studio and famed director King Vidor's (The Champ, The Big Parade) first talkie. But the film surpasses its historical significance, telling a story of such profound dignity and understanding that it as fresh and moving as the day it premiered. Featuring a largely unknown cast and infused with spirituals, folk songs, blues and jazz (Irving Berlin provided two songs for the production), Hallelujah follows the fortunes of Zeke (Daniel L. Haynes), a poor cotton farmer. He succumbs to the temptations of Chick (Nina Mae McKinney), a mercenary honky-tonk girl, finds salvation in religion, and falls again when his obsession for Chick overpowers his better self. Love, loss, passion, redemption and brilliant moviemaking: Hallelujah has it all.

Made in 1929, Hallelujah is an artifact of no small historical significance: the first major studio movie with an all-black cast and a white director (the esteemed King Vidor), it was also one of the earliest "talkies" after the silent film era. But it also has considerable artistic merit; simply put, Hallelujah is damned entertaining. Sure, the story isn't exactly subtle, a morality tale chronicling the tribulations of Zeke (Daniel L. Haynes), a poor cotton farmer who, succumbing to the carnal charms of the sexy Chick (Nina Mae McKinney, who was sometimes known as "the black Garbo"), finds himself caught up in a soul-scarring cycle of sin and salvation. There's also some painful dialogue of the "Where is you gwine?" and "Honey, I likes anything you's got!" variety. But the major themes presented here--temptation and transgression, redemption and repentance--are pure and universal, the dancing and singing (including two songs by Irving Berlin) are marvelous, and there are several scenes of extraordinary intensity. Those include Zeke's family's weeping, wailing response to the tragic death of his younger brother, followed by the repentant Zeke's turning to God, a sequence in which he's transformed into a latter day Martin Luther King, Jr., preaching with rhythms and cadences of hypnotic power. DVD extras include audio commentary by historian Donald Bogle, plus two shorts ("Pie, Pie Blackbird" and "The Black Network") featuring McKinney's singing, Eubie Blake's music, and the Nicholas Brothers' dance moves. A final note: Victoria Spivey, who portrays Missy Rose, the down home girl devoted to Zeke, was also one of the finest blues singers of the time. When she underwent a career revival in the early 1960s, she formed a record label whose first recording featured accompaniment by none other than Bob Dylan. --Sam Graham