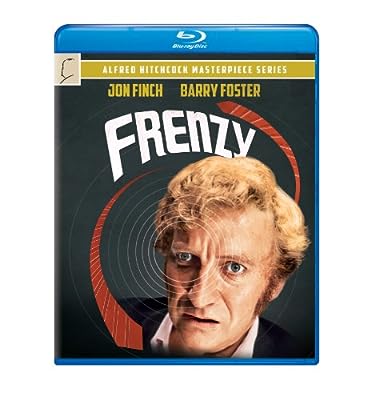 Price: $13.39
As of 2022-12-09 14:43:49 UTC (more info)
Product prices and availability are accurate as of 2022-12-09 14:43:49 UTC and are subject to change. Any price and availability information displayed on http://www.amazon.com/ at the time of purchase will apply to the purchase of this product.
Availability: Not Available - stock arriving soon
Buy Now from Amazon
Product Information (more info)
CERTAIN CONTENT THAT APPEARS ON THIS SITE COMES FROM AMAZON SERVICES LLC. THIS CONTENT IS PROVIDED 'AS IS' AND IS SUBJECT TO CHANGE OR REMOVAL AT ANY TIME.

Perfectly blending suspense and humour, Alfred Hitchcock's Frenzy is a shocking tale of murder set in modern-day London. A serial criminal known as the "Necktie Murderer" has the police on red alert and the trail is leading to an innocent man who must now elude the law and prove his innocence by finding the real murderer. Starring Jon Finch, Alex McCowen and Barry Foster, the film marked Hitchcock's return to his native England after nearly twenty years and demonstrates why he known as the Master of Suspense.