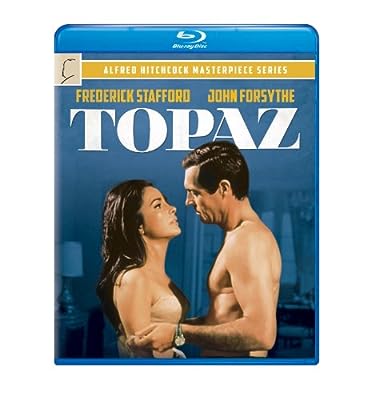 Price: $13.49
As of 2022-10-05 04:21:12 UTC (more info)
Product prices and availability are accurate as of 2022-10-05 04:21:12 UTC and are subject to change. Any price and availability information displayed on http://www.amazon.com/ at the time of purchase will apply to the purchase of this product.
Availability: Not Available - stock arriving soon
Buy Now from Amazon
Product Information (more info)
CERTAIN CONTENT THAT APPEARS ON THIS SITE COMES FROM AMAZON SERVICES LLC. THIS CONTENT IS PROVIDED 'AS IS' AND IS SUBJECT TO CHANGE OR REMOVAL AT ANY TIME.

Considered one of the more experimental films from Alfred Hitchcock, Topaz is a riveting story of adventure and international intrigue. Responding to rumors of Russian missiles and a NATO spy called Topaz, an American CIA agent (John Forsythe) hires French operative Devereaux (Frederick Stafford) to investigate in Cuba. In Havana, Devereaux’s investigation becomes dangerous, leaving behind a wake of shaken governments, murder, betrayal and suicide. This lavish production from the Master of Suspense exposes one of the most explosive spy scandals ever filmed.