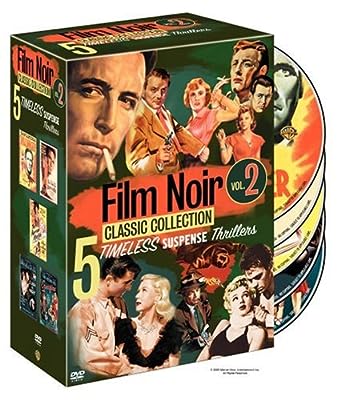 Price: $49.92
As of 2022-10-04 02:59:47 UTC (more info)
Product prices and availability are accurate as of 2022-10-04 02:59:47 UTC and are subject to change. Any price and availability information displayed on http://www.amazon.com/ at the time of purchase will apply to the purchase of this product.
Availability: Not Available - stock arriving soon
Buy Now from Amazon
Product Information (more info)
CERTAIN CONTENT THAT APPEARS ON THIS SITE COMES FROM AMAZON SERVICES LLC. THIS CONTENT IS PROVIDED 'AS IS' AND IS SUBJECT TO CHANGE OR REMOVAL AT ANY TIME.

Hollywood's legendary tough guys and femme fatales collide again in The Film Noir Classic Collection Volume Two. The Collection includes five smoldering classics, all new to DVD and all digitally remastered: Born to Kill, Clash By Night, Crossfire, Dillinger and The Narrow Margin. The movies star film noir icons Robert Mitchum, Barbara Stanwyck, Robert Ryan, Lawrence Tierney and Claire Trevor, among others, and feature commentaries from film historians and directors including Robert Wise on Born To Kill Peter Bogdanovich, with archival contributions from Fritz Lang, on Clash By Night; John Milius on Dillinger and William Friedkin and Richard Fleischer on The Narrow Margin.

Film noir is such a rich cinematic zone that second-tier specimens compel nearly as much fascination as the classics. At a glance, Volume 2 of Warner Bros.' (ever-expanding, we hope) Film Noir Collection is a distinct step down from Volume 1--inevitable when you've launched your series with five landmark titles, including three outright noir masterpieces (The Asphalt Jungle, Gun Crazy, Out of the Past). But linger beyond that first glance, because the second set is a flavorful mix of sleazoid iconography (two vehicles for B-movie bad boy Lawrence Tierney), an offbeat outing for a major director (Fritz Lang in his Howard Hughes RKO period), Poverty Row production circumstances that encourage aggressively peculiar, verging-on-radical filmmaking (the strange mélange that is Monogram's Dillinger), and two pressure-cooker suspense pictures that are landmark films in their own right (Crossfire and The Narrow Margin).

Jean-Luc Godard dedicated Breathless to Monogram Pictures, and Dillinger (1945) was probably the main reason why. With an Oscar-nominated script credited to Philip Yordan (abetted by his friend William Castle, director of Monogram's excellent When Strangers Marry), Max Nosseck's 60some-minute account of the Depression-era outlaw's brashly improvisatory career is a hypnotic mix of bargain-basement filmmaking (lotsa stock footage and minimalist sets), astute ripoff (the rain-and-gas-bomb robbery sequence from Lang's You Only Live Once), and Brechtian bravura. The major Hollywood studios had taken a vow of chastity when it came to glorifying gangsterism; Monogram ignored the embargo and barreled ahead to unaccustomed popular and critical success. The storyline actually scants the ultraviolence (no Bohemia Lodge shootout) and all-star supporting cast (no Pretty Boy Floyd, no Baby Face Nelson) of Dillinger's real life--likely a matter of cost-cutting rather than abstemiousness. Newcomer Lawrence Tierney nails the guy's coldblooded freakiness and animal magnetism, and the supporting cast includes such éminences noirs as Marc Lawrence, Eduardo Ciannelli, and Elisha Cook Jr. Producers Maurice and Frank King would make Gun Crazy four years later.

Born to Kill (1947) is the second helping of Tierney, playing a psychotic drifter who's irresistible to women ("His eyes run up and down ya like a searchlight!" breathes housemaid Ellen Colby, just about the only female he doesn't bother targeting). A number of people end up dead by his hand, but the kicker is that he crosses paths with a woman--socialite-divorcee Claire Trevor--just as heartless as he, and even more treacherous. The script makes less sense with each passing reel, but there are ripe character turns by Walter Slezak, as a philosophical private eye who operates out of a diner; Elisha Cook Jr., as Tierney's more level-headed partner; and Esther Howard, as a hard-bitten old bat who flirts with Cook in a nightmarish nocturnal wasteland outside San Francisco.

Three Roberts--Young, Mitchum, and Ryan--costar in Crossfire (1947), one of only a handful of noirs to be sanctified with Academy Award nominations: best picture, director Edward Dmytryk, screenwriter John Paxton, and supporting players Ryan and Gloria Grahame. The film unreels during a single sweaty, post-WWII night when one among a squad of GIs on leave in Washington, D.C., murders a nice Jewish man (Sam Levene) because he doesn't like "his kind." The audience knows who's guilty before the cops do, and Ryan's portrayal of the bigot will make the hair on your neck rise. Police detective Robert Young plays with his pipe too much and makes one speech too many, but the atmosphere is memorably taut and surreal.

Robert Ryan may be even scarier in Fritz Lang's Clash by Night (1952), a rare noir without any criminal aspect: all its bitterness and savagery is emotional, psychological, and--preeminently--sexual. Barbara Stanwyck, slightly past her stellar peak but in her prime as an actress, plays a married woman in a New England fishing town who knows what a bad idea it is but falls anyway for a vicious, misogynistic movie projectionist. Sample Clifford Odets dialogue, Stanwyck to Ryan: "What do you want to do to me? Put your teeth in me? Hurt me?" Clinching ensues. (All this and Marilyn Monroe, too.)

We've saved the best for last. Narrow Margin (1952) is the kind of trim, beautifully paced movie people have in mind when asking, "Why don't they make 'em like that anymore?" Two cops have to guard a gangster's widow against assassination as she rides the Golden West Limited sleeper train from Chicago to give evidence in L.A. Soon there's only one cop (gravel-voiced Charles McGraw, usually a villain), and he's finding the sharp-tongued widow (Marie Windsor) as obnoxious as she is endangered. Nothing goes quite as you'd expect in this exemplary train thriller, which rattles and rocks toward its destination without a music track or a wasted moment. --Richard T. Jameson