Fishing With John (The Criterion Collection) 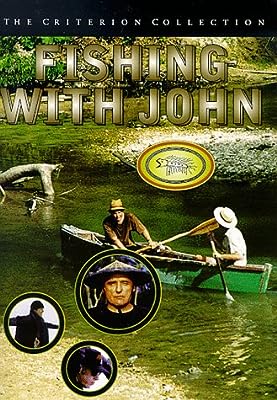 Price: $24.95
As of 2022-10-02 16:33:51 UTC (more info)
Product prices and availability are accurate as of 2022-10-02 16:33:51 UTC and are subject to change. Any price and availability information displayed on http://www.amazon.com/ at the time of purchase will apply to the purchase of this product.
Availability: Not Available - stock arriving soon
Buy Now from Amazon
Product Information (more info)
CERTAIN CONTENT THAT APPEARS ON THIS SITE COMES FROM AMAZON SERVICES LLC. THIS CONTENT IS PROVIDED 'AS IS' AND IS SUBJECT TO CHANGE OR REMOVAL AT ANY TIME.

John Lurie knows absolutely nothing about fishing, but that doesn't stop him from undertaking the adventure of a lifetime on fishing with John. Traveling with his special guests to the most exotic and dangerous places on earth, John Lurie battles sharks with Jim Jarmusch off the top of Long Island and more.

Originally produced for the Independent Film Channel, John Lurie's idiosyncratic take on the classical fishing program places the genre in entirely alien terrain--and that doesn't just refer to the strange and exotic locations. Best known to filmgoers for roles in Stranger Than Paradise and The Last Temptation of Christ, Lurie is also a composer, a saxophonist, the leader of the jazz group the Lounge Lizards, and a painter. Fisherman, however, is nowhere to be seen on his résumé, so this city-bred hipster's foray into rod and reel country is obviously another kettle of fish. Reeling in buddies Tom Waits, Matt Dillon, Willem Dafoe, Dennis Hopper, and director Jim Jarmusch to join him on his fishing trips to such faraway locales as Jamaica, Costa Rica, and Thailand, Lurie takes his show completely out of the "how to" realm: imagine a talk show defined by its contemplative silences. Fishing with John teaches nothing about fishing. Instead, John simply enjoys the company of his buddies as they venture out into unfamiliar territory and drop a line in the water, tossing in a current of absurdist commentary (dryly intoned by Roy Webb) and surreal speculation for good measure. This is the ultimate fishing show for people who could not care less about fishing. --Sean Axmaker

From Russia with Love [Blu-ray]