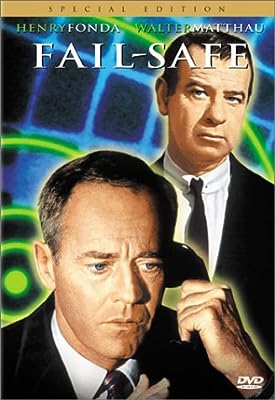 Price: $9.96
As of 2023-02-06 04:47:51 UTC (more info)
Product prices and availability are accurate as of 2023-02-06 04:47:51 UTC and are subject to change. Any price and availability information displayed on http://www.amazon.com/ at the time of purchase will apply to the purchase of this product.
Availability: Not Available - stock arriving soon
Buy Now from Amazon
Product Information (more info)
CERTAIN CONTENT THAT APPEARS ON THIS SITE COMES FROM AMAZON SERVICES LLC. THIS CONTENT IS PROVIDED 'AS IS' AND IS SUBJECT TO CHANGE OR REMOVAL AT ANY TIME.

One of the greatest anti-war thrillers ever, FAIL-SAFE stars Henry Fonda, Walter Mathau, Dan O'Herlihy, Larry Hagman and Fritz Weaver (in his film debut) as a group of military men on the verge of World War III. When a military computer error deploys a squadron of SAC bombers to destroy Moscow, theAmerican President (Fonda) tries to call them back. But their sophisticated fail-safe system prevents him from aborting the attack, so he must convince the Soviets not to retaliate. In desperation, the President offers to sacrifice an American city if his pilots succeed in their deadly mission overMoscow. A four-star techno-thriller that builds tension and suspense with every tick of the nuclearclock.