Film Noir Classic Collection, Vol. 1 (The Asphalt Jungle / Gun Crazy / Murder My Sweet / Out of the Past / The Set-Up) 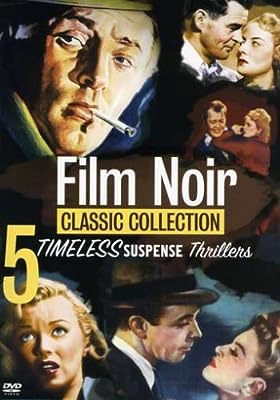 Price: $49.92
As of 2022-10-04 02:59:13 UTC (more info)
Product prices and availability are accurate as of 2022-10-04 02:59:13 UTC and are subject to change. Any price and availability information displayed on http://www.amazon.com/ at the time of purchase will apply to the purchase of this product.
Availability: Not Available - stock arriving soon
Buy Now from Amazon
Product Information (more info)
CERTAIN CONTENT THAT APPEARS ON THIS SITE COMES FROM AMAZON SERVICES LLC. THIS CONTENT IS PROVIDED 'AS IS' AND IS SUBJECT TO CHANGE OR REMOVAL AT ANY TIME.

Asphalt Jungle (1950)- You have a lot of time to think when you're locked away seven years. So criminal mastermind Doc conceives what he believes is the perfect heist. John Huston explores the feverish grab for the big score and how it unravels in The Asphalt Jungle, a renowned tale of dishonor among thieves whose cast includes. Gun Crazy (1949) - When gun fancier Bart Tare sees Annie Laurie Starr's sideshow sharpshooting act, he's a dead-bang goner. The two become bank robbers on the run, eluding roadblocks and roaring into movie history as one of the benchmark film-noir works. Murder My Sweet (1944)- They say crime doesn't pay. Private detective Philip Marlowe knows better. The fat wad of folding moneywarming his pocket is the kind of thing that keeps him going through thick and thicker as he wades chin deep into a mystery involving a missing necklace and a missing hoodlum's moll named Velma. Murder, My Sweet is film at its most noir, creating a moody sense moody sense of a world that never plays on the level. Out of the Past (1947)-Everything you want in a film noir you'll find in Out of the Past. A tenacious detective (Robert Mitchum) spinning his wheels to make good. A drop-dead beauty (Jane Greer) up to no good. A moneyed mobster (Kirk Douglas) with a shark's grin. Plus double-crosses and fall guys. Shadowy rooms and bleak souls. The Set-Up (1949)- Boxing Wednesdays. Wrestling on Fridays. Stoker Thompson is on Paradise City's Wednesday card, fighting after the main event. He's been 20 years in the game and is sure he's just one punch away from big paydays. But there's one thing Stoker doesn't yet know: his manager wants him to take a dive tonight.

Some boxed sets claim to be definitive, but are haphazardly selected. Not this one. Four of the five titles here can legitimately lay claim to being essentials in the film noir canon, and the fifth, The Set-Up, is a terrific boxing picture with a strong noir atmosphere. If you're a fan of noir--or have no idea what it's all about--this collection is a treat.

Of course, none of these movies were made as "film noir." The term was coined later by French critics to describe the moody, anxious feel of postwar American movies, especially the genre that highlighted duplicitous dames and susceptible men lost in the criminal jungle. Indeed, the title The Asphalt Jungle conveys the edgy urban arena of these pictures. That film is John Huston's masterly 1950 account of a heist, with Sterling Hayden the disenchanted, noirish hero. Joseph H. Lewis's Gun Crazy (1949) is one of the most supercharged (and sexually perverse) of noir films, with John Dall and Peggy Cummins as young criminals in love. Murder, My Sweet (1944) is a straight adaptation of Raymond Chandler's novel Farewell, My Lovely. Amid the film's shadowy chiaroscuro, former musical comedy star Dick Powell makes a career-changing transition as Chandler's private dick, Philip Marlowe. Out of the Past puts Robert Mitchum (perhaps the quintessential noir actor) in trouble with gangster Kirk Douglas, complicated by classic femme fatale Jane Greer. Jacques Tourneur provides the evocative direction. And The Set-Up plays out an ingenious boxing tale in "real time," superbly enacted by (former boxer) Robert Ryan. --Robert Horton