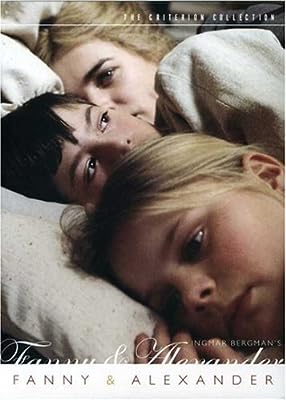 Price: $27.73
As of 2022-12-09 07:28:27 UTC (more info)
Product prices and availability are accurate as of 2022-12-09 07:28:27 UTC and are subject to change. Any price and availability information displayed on http://www.amazon.com/ at the time of purchase will apply to the purchase of this product.
Availability: Not Available - stock arriving soon
Buy Now from Amazon
Product Information (more info)
CERTAIN CONTENT THAT APPEARS ON THIS SITE COMES FROM AMAZON SERVICES LLC. THIS CONTENT IS PROVIDED 'AS IS' AND IS SUBJECT TO CHANGE OR REMOVAL AT ANY TIME.

It was instantly acclaimed the crowning masterwork of Ingmar Bergman's career, and time has not dimmed the Olympian status of Fanny and Alexander. Bergman drew upon memories of his own childhood for this portrait of the Ekdahls, the upper-class Swedish family whose celebrations and tribulations are seen through the eyes of 10-year-old Alexander (Bertil Guve). The world of the theater, of puppet shows and magic lanterns, does battle in this scenario with the cold realities of the palace of the bishop--a man whose influence over Alexander's mother gives the movie the stark outlines of a fairy tale.

As for the Criterion five-disc DVD: This may be the most beautiful DVD release ever devoted to a single film. The original 188-minute international release is here, of course, in all its original glory. (It won four Oscars: foreign language film, costumes, art direction/set decoration, and cinematography--the last to longtime Bergman collaborator Sven Nykvist.) An audio commentary by Peter Cowie gives useful background.

That film was carved out of Bergman's preferred 312-minute version, telecast on Swedish TV and included here. While the shorter cut remains a wonderful movie, and complete unto itself, the five-hour film is a deep, luxurious expansion. There is more of the Christmas Eve party that begins the film, more of the theater, more of Alexander's imagination. Especially meaningful is a long sequence between Fanny and Alexander and their doomed father, as he demonstrates the nature of storytelling with a simple chair.

Also here is The Making of Fanny and Alexander, Bergman's feature-length self-portrait, and a fascinating look at the rapt attention he bestows on actors and camera. DVD extras include a penetrating hourlong TV interview Bergman gave in 1984, and a 40-minute documentary shot in 2004 with reminiscences from cast and crew (including actors Guve, Pernilla August, and Erland Josephson). A handsome booklet includes essays by Rick Moody and Paul Arthur, and one disc is made up of pithy introductions shot by Bergman in 2003, for 11 of his classics, plus a sampling of trailers. Fanny and Alexander was Bergman's final theatrical film, though he has gone right on making TV movies and writing screenplays. This is a fitting treatment of his triumph. --Robert Horton